Recently I had the privilege of participating in the event Days of Atheism 2015 (in Polish, Dni Ateizmu) held in Warsaw, the Polish capital, 27-29 March 2015, and organized by our friends of the Koalicja Ateistyczna (Atheist Coalition) and by the Kazimierz Łyszczyński Foundation. This is an event which will repeat annually and this year 2015 marks its second occurrence.

Each year, in addition to a variety of lectures and social activities, participants gather to form a procession in order to re-enact an historic event which is of crucial importance for Polish atheists: the execution of Kazimierz Łyszczyński, philosopher and aristocrat, for the “crime” of atheism, more precisely for having written a philosophical treatise “De non existentia Dei” in which he affirmed that god does not exist: on the contrary, god is merely an illusion invented by humans, by people who themselves did not believe in god’s existence and who used that falsehood in order to control ordinary folk through fear. The re-enactment takes place on the same date approximately as the execution and the procession ends in the same marketplace in the historic old city where Łyszczyński was beheaded in 1689.

The organization of the congress was not without its difficulties. The principal organizer Nina Sankari and her colleagues of the Koalicja Ateistyczna had to confront several serious problems. One of the principal speakers, Waleed Al-Husseini, a Palestinian blogger and atheist, accused of blasphemy by the Palestinian Authority and currently living in exil in France, was detained for interrogation by French authorities as he was about to depart for Warsaw from a Parisian airport. The delay was just long enough to make his participation in the congress impossible.

Most of the sessions of the event were to take place in the Polish Parliament building, but Polish authorities, for their part, reacted skittishly to that fateful word “ateizm” (a similar phenomenon can be observed in Quebec, where the word “atheism” often frightens the small-minded) and as a result the congress had to be split into two supposedly distinct events: an “International Congress for Freedom of Conscience, Speech, Art and Scientific Research” held at the Parliament and the Days of Atheism themselves held at the University of Warsaw and at other venues. Simultaneous translation between the Polish, English and French languages was provided for the parliamentary sessions, but the absence of this service at the other locations constituted a further difficulty.

Furthermore, several Lebanese participants had considerable trouble obtaining the visa necessary for travel to Poland. They were eventually successful, but only visas of the shortest possible duration, barely adequate, were granted.

The congress was nevertheless a great success. The first session of speakers was held in a ground-floor hall in the Parliament building on March 27th, co-chaired by Wanda Nowicka, a feminist, left-wing member of Parliament and vice-marshall (vice-speaker) of the Diet (Sejm or lower chamber of the Polish Parliament) and Nina Sankari, vice-president of the Atheist Coalition. Among the speakers at this session were: a representative of Freethought Lebanon, Sue Cox of Survivors Voice Europe, an organization of former victims of sexual abuse by priests, Rene Hartmann of Atheist Alliance International (AAI), Dorota Wójcik of Wolność od Religii (Freedom From Religion) Foundation, Anna Dryjańska, feminist and secular activist from the web site Watykanizacja (Vaticanization), Małgorzata Marenin who is suing archbishop Jozef Michalik (for having declared that pedophilia is caused by feminism and broken families) and Barbara Nowacka of the anticlerical political party Twój Ruch (Your Movement).

Click to view full size
Session at the Polish Parliament, Freedom of Conscience and Speech, 27 March 2015

The next day, March 28th, a second parliamentary session was held; this time with a more academic tenor, on the theme “Bioethics and Freedom of Scientific Research.” It was held in the large Column Hall directly above the hall where the first session was held. Several professors gave lectures, among them Charles Susanne of the Université libre de Bruxelles (Free University of Brussels) and member of the Polish Academy of Sciences, two French academics speaking for the French National Freethought (including the organization’s president Jean-Sébastien Pierre), and several from Polish universities. A talk was also given by Gauthier Ngumbu of the Congolese Freethought (Democratic Republic of Congo). 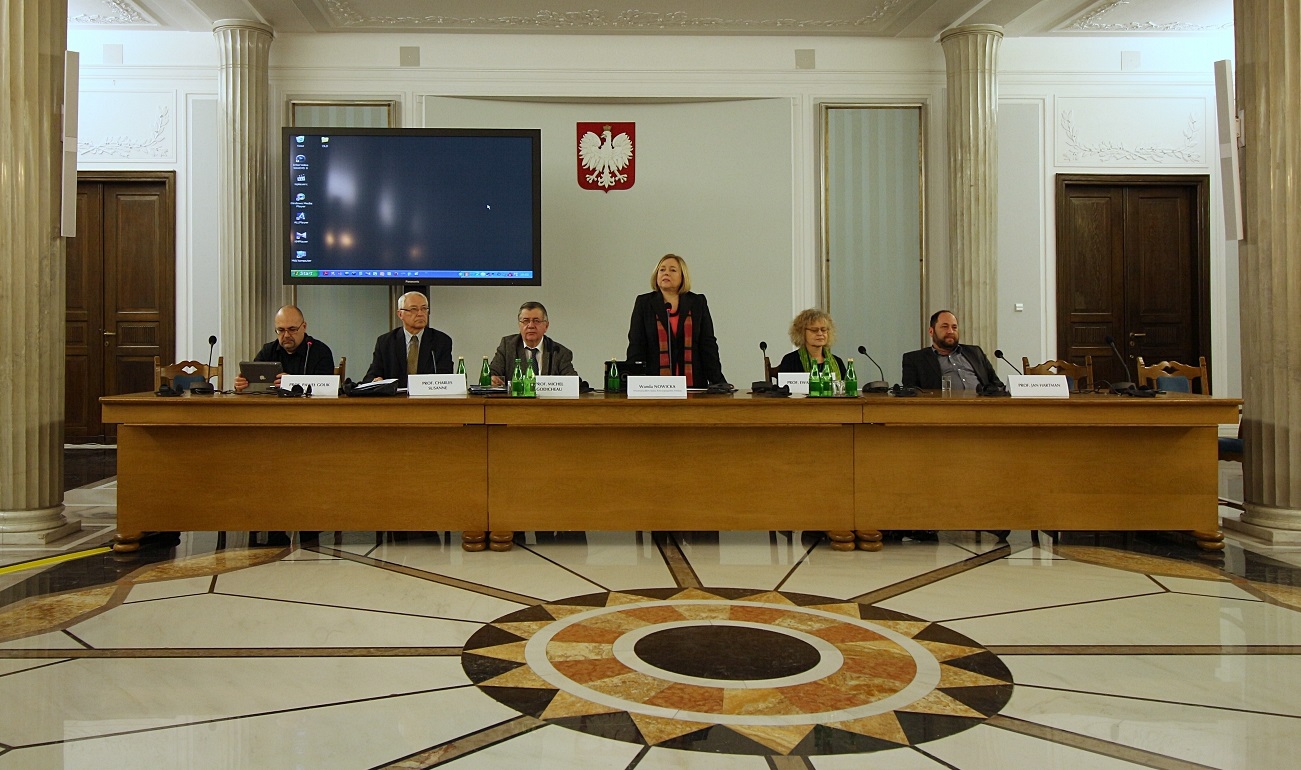 For my part, I gave a brief talk on the theme “Freedom of Conscience and Freedom of Speech in Canada” during a session held on the morning of Saturday March 28th in an amphitheatre of the University of Warsaw. I did a quick survey of several aspects of the question, including the mention of “God” in the preamble of the constitution, the paragraphs of the Criminal Code which ban blasphemy, the controversy surrounding the Secularism Charter in Quebec, as well as the issue of the niqab worn during citizenship ceremonies. The kernel of my presentation was to highlight the ravages of that sacred cow named “multiculturalism,” an expression far too positive-sounding to describe an ideology which should more properly be called “ethno-religious determinism.” This remark prompted spontaneous and approving applause.

Speakers from several other countries — Germany, France, Belgium, etc. — also presented talks during this session. Furthermore, Nina Sankari presented the Message from the International Association of Free Thought (IAFT) to the Congress in Warsaw. 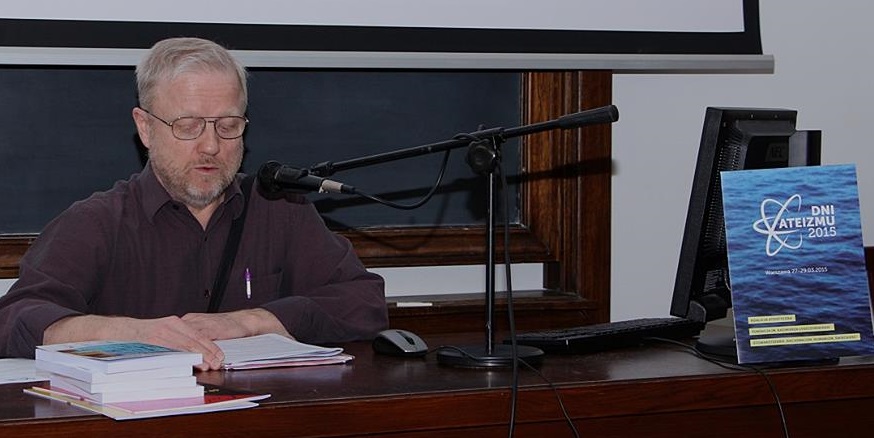 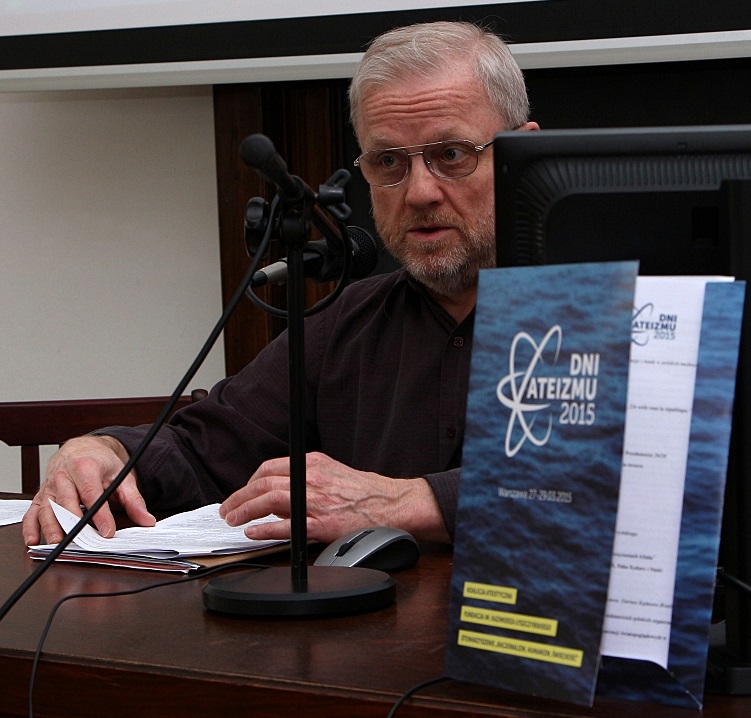 That session was followed by the historical re-enactment described above. During the procession several young Christian fundamentalists harassed us marchers by shouting songs and slogans touting the merits of “good Catholic Poland.” Personally I found that, in doing so, these fanatics added a note of authenticity to the event whose purpose, after all, was to point out the danger constituted by the arrogance and fanatism of monotheists.

Other sessions of these Days of Atheism were held in a municipal conference hall above a café in a neighbourhood traditionally inhabited by Warsaw’s Jewish population — that is, until that population was massacred in great numbers by the Nazis after invading the country in 1939. The first day of the event ended with an evening of atheist films by Zenon Kalafaticz. On the evening of Saturday the 28th an Atheist Banquet was held in a bistro in the Palace of Culture and Science, including the awarding of the Atheist of the Year Prize.

In a monolithically Catholic county and faced with major obstacles, the organizers of Days of Atheism 2015 succeeded, with perspicacity and perseverance, in delivering a major blow against obscurantism, for freedom of conscience and for the visibility of atheists.

One comment on “Blog 057: Days of Atheism in Warsaw, Poland”