An Initiative of One Law for All, UK 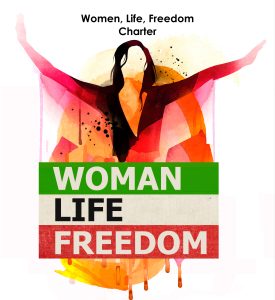 Iran’s women’s revolution has announced the end of the Islamic regime and its discrimination, misogyny and violations of the human right to life.

The courage and beauty of the struggle of the youth and all members of society has inspired the world. Widespread gatherings outside Iran have shown unprecedented solidarity.

This is the end of Islamic rule and the beginning of a new Iran. An Iran imprinted with ‘women, life, freedom.’

We, the undersigned, announce the Woman, Life, Freedom Charter. PLEASE SIGN THE HISTORIC CHARTER. YOU CAN ADD YOUR DEMANDS TOO.

We demand the overthrow of the Islamic regime and the creation of a free, equal, prosperous and secular society. A society where all human beings enjoy full freedom and equality. A society where there is no discrimination, censorship and repression.

Our primary demands are as follows:

We call on all Iranians, whether inside Iran or abroad, to support the Woman, Life, Freedom Charter.

We also call on Iranian to add their demands to the Charter.

We call for a People’s Congress to incorporate people’s demands so that the Charter becomes a common programme enshrining the hopes and aspirations of all people in a free Iran.

Join us. Victory is near.