Will There Still Be “Yes, Buts”?

This editorial — an eloquent appeal for secularism, real secularism — is taken from number 1178 of Charlie Hebdo, January 14th 2015, the first issue published after the horrific attack of January 7th.

For the past week, Charlie, an atheist weekly, has performed more miracles than all the saints and prophets combined. What we are most proud of is that you have in your hands the magazine we have always made in the company of those who have always made it. What made us laugh the most is that the bells of Notre Dame have rung in our honour … Over the past week, Charlie throughout the world has moved much more than mountains. Over the past week, as Willem has so beautifully drawn it, Charlie has won many new friends. Anonymous people and global celebrities, the humble and the well-to-do, disbelievers and religious dignitaries, the sincere and the Jesuits, some we will keep for life while others are only passing by. Today we accept them all, for we have neither the time nor the heart to sort them out. But we are not fooled either. We thank with all our heart all those millions, whether private citizens or representatives of institutions, who are really on our side and who, sincerely and deeply, “are Charlie.” They know who they are. And we say fuck off to the others, who, in any case, don’t give a shit… 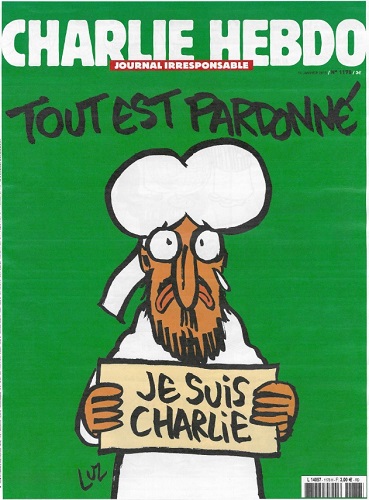 In recent years, we have felt somewhat alone, trying to push back with pencil strokes the obvious crap and the pseudo-intellectual niceties that have been thrown in our faces, and the faces of those friends of ours who strongly defended secularism: islamophobes, christianophobes, provocateurs, irresponsible, throwers of oil on fire, racists, you-asked-for-it … Yes, we condemn terrorism, but. Yes, threatening cartoonists with death, that’s not nice, but. Yes, burning down a newspaper office, that’s wrong, but. We have heard it all, and so have our friends. We have often tried to laugh at this, because that is what we do best. But now we would really like to laugh at something else. Because it is already happening again. The blood of Cabu, Charb, Honoré, Tignous, Wolinski, Elsa Cayat Bernard Maris, Mustapha Ourrad, Michel Renaud, Franck Brinsolaro, Frédéric Boisseau, Ahmed Merabet, Clarissa Jean-Philippe, Philip Braham, Yohan Cohen, Yoav Hattab, François Michel Saada, had not yet dried when Thierry Meyssan explained to his Facebook fans that it was obviously a Judeo-Americano-Western plot. We could already hear, here and there, the self-righteous tsktsking over last Sunday’s rally, spewing from their lips the eternal quibbles whose goal is to justify, openly or implicitly, terrorism and religious fascism, and getting indignant, among other things, about praising the police = SS. No, in this massacre, there is no death less unjust than others. Franck, who died on the premises of Charlie, and his colleagues killed during this week’s barbarity, died to defend ideals that maybe were not even theirs.

[…] that people will finally stop, whether through posturing or electoral calculation or cowardice, legitimising or even tolerating communitarianism and cultural relativism, which open the way to one thing only: religious totalitarianism.

We will still try to be optimistic, although it’s not the season. It is our hope that, starting on January 7th, 2015, the necessity of a firm defense of secularism will be obvious to everyone, and that people will finally stop, whether through posturing or electoral calculation or cowardice, legitimising or even tolerating communitarianism and cultural relativism, which open the way to one thing only: religious totalitarianism. Yes, the Israeli-Palestinian conflict is a reality, yes, international geopolitics are a succession of manoeuverings and dirty tricks, yes, the social situation of so-called “populations of Muslim origin” in France is deeply unfair, yes, racism and discrimination must be fought relentlessly. Fortunately, there are several tools to address these serious problems, but they are all ineffective if one is missing: secularism. Not positive secularism, not inclusive secularism, not secularism-whatever: secularism, period. Because it advocates the universality of rights, only secularism allows the exercise of equality, liberty, fraternity, and sorority. Secularism alone allows full freedom of conscience, a freedom which all religions, depending on their PR positioning, deny more or less openly as soon as they leave the field of the strictly private and descend unto the political arena. Secularism alone allows, ironically, both believers and non-believers to live in peace. All those who claim to defend Muslims by accepting the religious totalitarian discourse are in fact defending the executioners. The first victims of Islamic fascism are Muslims themselves.

The millions of anonymous people, all the institutions, all the heads of state and government, all the political, intellectual and media personalities, all the religious dignitaries who this week proclaimed “Je suis Charlie” need to know that that phrase also means “Je suis pour la laïcité/I am for secularism.” We are convinced that for the majority of our supporters, this goes without saying. We leave the others to figure it out on their own.

One more thing, an important one. We would also like to send a message to Pope Francis, who “est Charlie” also, this week: we welcome the bells of Notre-Dame ringing in our honour but only if they are rung by members of Femen.