In the News:
Medical Journal Censors Criticism of Veil

jean.meslier Posted in In the News — 2 Comments ↓ 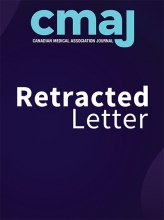 A major Canadian medical journal has retracted a letter to the editor by a prominent surgeon in Quebec who expressed reservations about a photo the journal had published of two young girls, one of whom was wearing a hijab.

The photo in question […] ran on the cover of the November 8, 2021 issue of the Canadian Medical Association Journal. The image prompted a letter from Sherif Emil, an endowed chair of surgery at Montreal Children’s Hospital of McGill University. Published December 20, the letter voiced concern that the photograph used “an instrument of oppression [the headcovering] as a symbol of diversity and inclusion.” (That’s in the title of the letter, which the journal now acknowledges writing, not Emil.)

The editor of the Canadian Medical Association Journal (CMAJ) has behaved with abject cowardice by retracting a letter from a Montreal pediatrician criticizing Islamic veils. Why the retraction? Because the National Council of Canadian Muslims (NCCM) accused the pediatrician’s letter of so-called “Islamophobia.” This reveals what we have known for years: that this accusatory term serves only as a way to muzzle legitimate criticism of Islam and Islamism. It amounts to an accusation of blasphemy against Islam.

The pediatrician was right to criticize the hijab, especially when imposed on children. By capitulating to the NCCM’s threat and censoring the criticism, the CMAJ has granted an important victory to religious obscurantism.

The veiling of children is a form of child abuse and should be denounced a such.

2 comments on “In the News:
Medical Journal Censors Criticism of Veil”