↓ Skip to Main Content
Home › Special Events › Declaration: Saudi Arabia and the Rights of Women at the UN

Declaration: Saudi Arabia and the Rights of Women at the UN

The following is a translation of the original declaration published in French in:

No, Saudi Arabia Cannot Defend the Rights of Women at the United Nations!

Saudi Arabia, a country which practices a very hard-line form of Islam, including imposition of Sharia law, has just been elected as member of the United Nations Commission on the Status of Women for a period of four years. Thus, by secret ballot, the Economic and Social Council (ECOSOC) of the UN has allowed the Wahhabi kingdom to sit as a member of the Commission, composed of 45 states, whose mandate is to promote the rights of women and ensure their autonomy. According to Canadian Hillel Neuer, executive director of UN Watch, “Electing Saudi Arabia to protect women’s rights is like making an arsonist into the town fire chief.” We agree with that opinion. This election is veritable scandal, an insult to everyone’s intelligence! 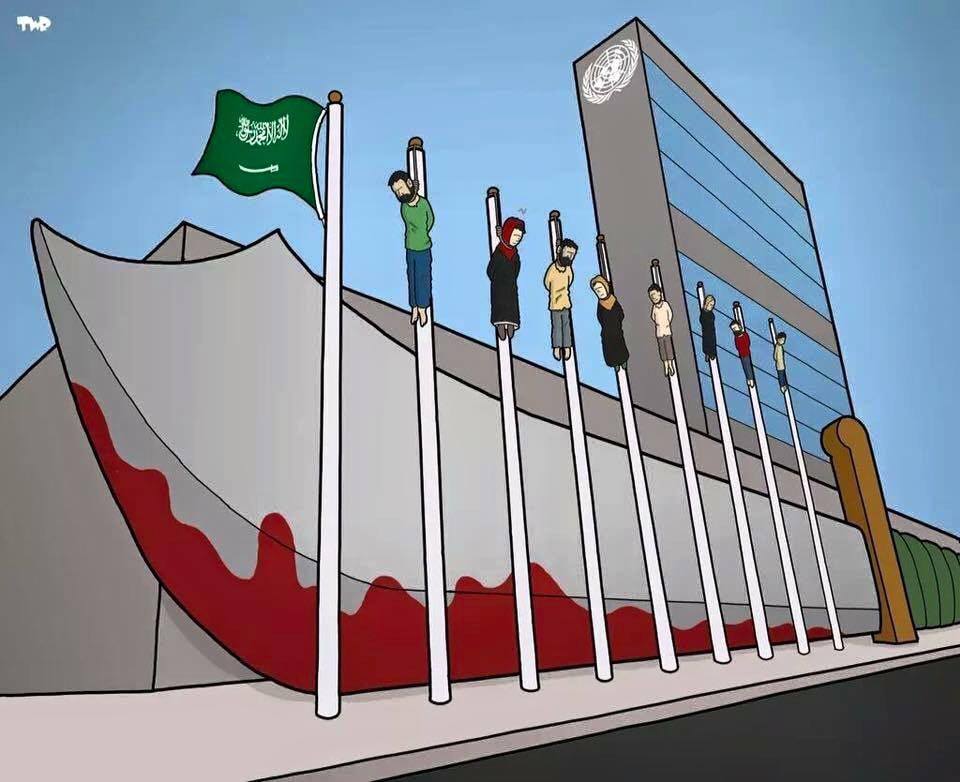 Recall that the Universal Declaration of Human Rights was adopted in 1948 at the General Assembly of the United Nations, consisting of 58 member states. Although at that time no state came out against the Declaration, eight did abstain—including Saudi Arabia, citing the incompatibility between its political regime and the principle of equality between women and men as guaranteed it the Declaration. In the area of human rights, has this regime made any progress since that time? Has it evolved enough to deserve a seat on the UN Commission on the Status of Women? It is obvious to everyone that the gender apartheid institutionalized by the Saudi kingdom indicates nothing but disdain for all relevant international standards. Of course we recognize that there have been a few small improvements, here and there, since 1948. Too few, too little. Nevertheless, women are still considered to be minors for life. Not to mention that, on the international stage, the Saudi kingdom is in large part responsible for the promotion of an extremist Wahhabo-Salafist version of Islam, which promotes jihad, hatred for non-believers and Jews, death for apostates and homosexuals as well as imprisonment for freethinkers, the most famous of which is Raïf Badawi.

Under such conditions, it is unacceptable that Saudi Arabia be parachuted into a commission whose principal mandate is to guarantee and promote women’s rights throughout the world, unless one remains wantonly blind to the nature of its regime. In such a situation, we have serious questions about the process which led to such an election. Which states voted in favour of granting Saudi Arabia a seat? What did they receive in exchange? Through such complacency, do these states realize that they are selling out human rights and endangering our collective security? According to UN Watch, at least five states of the European Union (members of ECOSOC) permitted the election of Saudi Arabia. We have learned that Belgium, as a result of a diplomatic misunderstanding, was one of them. Furthermore, Belgium’s prime minister says he regrets his country’s vote! But who are the other states? Is France one of them? Germany? Greece? Italy? The United Kingdom? Portugal? Ireland? Sweden? The Czech Republic? We want to know. We demand to know the truth!

As women suffer the full effects of the economic crisis, the erosion of public services, the increasingly authoritarian turn of several countries and the meteoric rise of various religious fundamentalisms and the violence which they engender, we consider that it is urgent that a clear message be sent. Those who contribute to the creation of inequalities and who convey violence are not worthy of our confidence. Today, more than ever, we must protect women, facilitate access to healthcare and to sexual and reproductive rights, guarantee the right to education, culture and work, and ensure that women can exercise their full citizenship. Our rights are not for sale! Our freedoms are not negociable! Our dignity is not to be sold off! Stop lying to us; Saudi Arabia is no ally of women!

We must be aware that, in light of the rise of political extremism and the threat of religious fundamentalism, it is our duty to defend democracy and to ensure respect for fundamental human rights. In this struggle, the policies of democratic states must not suffer from any incoherence or ambiguity. We cannot pretend to fight against Daesch in the Middle East while normalizing relations with a clone of Daesch having status at the United Nations. The official doctrine of Saudi Arabia endangers the peace of nations and compromises fraternity among peoples.

We ask our respective states—Quebec and Canada—to denounce the election of Saudi Arabia to the United Nations Commission on the Status of Women. We demand that both Saudi Arabia and Iran be excluded from the Commission, two countries which practice segregationist policies with respect to girls and women.