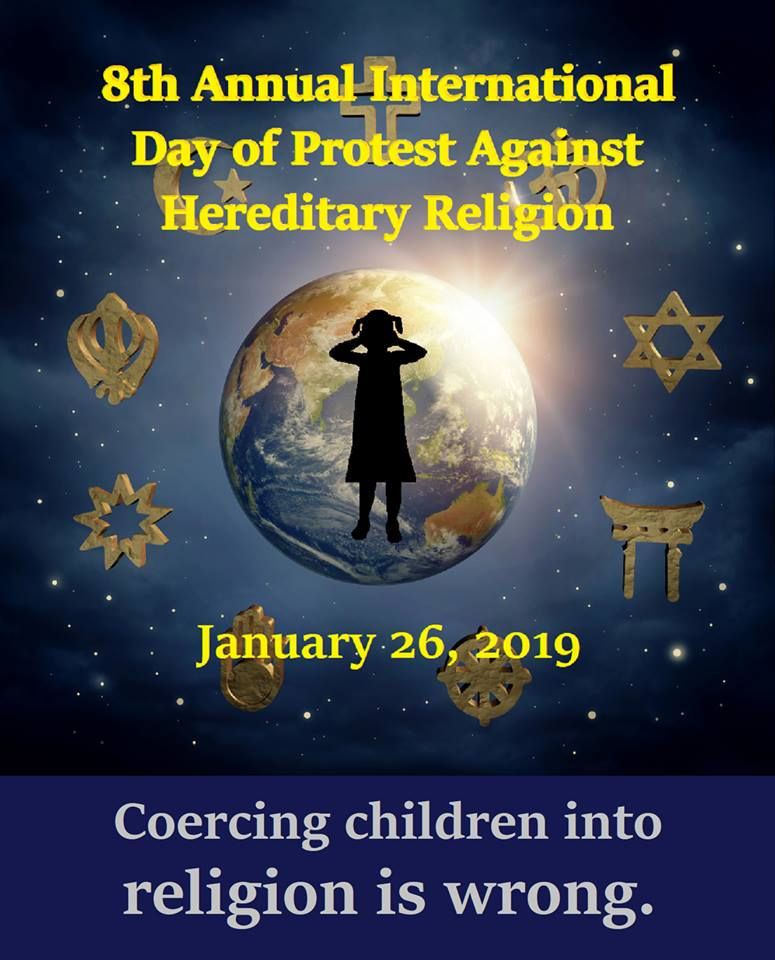 The 8th Annual International Day of Protest Against Hereditary Religion is on Saturday, January 26, 2019, online and in mixed media. The world is invited.

Humanity’s great gift is the ability to figure out the landscapes around them, but religion makes that harder by muddling peoples logic and confusing their sensibilities. Religions take up half of their precious time with lectures and games about imaginary ghost commanders and their iron age superstitions. They train people to rationalize any random thing they desire, in a religious context and otherwise, shame people for pursuing knowledge and discourage them from optimizing their survival.

Revolutions in fields like information and technology enable our potential to thrive at increasingly more sophisticated levels and make it harder for religion to maintain its strangle hold on our critical thinking capacity, but the remaining overlap is wreaking havoc. You can’t cripple peoples ability to make good decisions and give them increasing levels of power at the same time. Religion has to be reduced to the status of anachronistic hobby and isolated cult as soon as it can be, be that in ten or two hundred years. To do that, we plant more of the crucial seeds of freedom from religion now.

Anyone who has ever worked to discourage religion knows how hard it can be. Once the religious meme infects its host, the victims chances for intellectual survival are slim. So what can we do? Well, if you don’t want people to die from the plague, then you have do what it takes to get the plague to stop infecting people.

Do children deserve to be forcefully injected, indoctrinated with destructive ignorance? The answer is no. We protest that and work together to strategize ways to make it harder to do. What ideas do you have? How can we get better child abuse clauses and enforcement mechanisms as they relate to this into human rights policies at any level?

For further information, go to the Facebook page End Hereditary Religion and consult the announcement of the Day of Protest.