2022-10-20: Launch of French Version of Unveiled by Yasmine Mohammed

Don’t forget! Yasmine Mohammed will be our special guest at
our November 19th event. 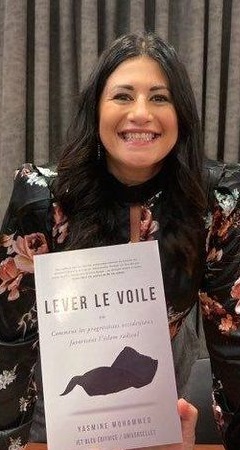 On the evening of October 20th 2022, I attended the launch of the French version Lever le voile (published by Jet Bleu Éditrice) of the book Unveiled by Yasmine Mohammed. The event was expertly moderated by Johanne St-Amour, public relations officer for Jet Bleu. Important security measures were in place. After Johanne read the Prologue of the book, in order to present the context, Yasmine answered questions from the moderator and the attendees in the room. An excellent discussion and an excellent evening. The following is a brief account of the author’s remarks.

Breaking Out of Solitude

At first, Yasmine Mohammed felt completely alone—the only one having such a difficult and painful childhood and youth, physically and emotionally abused. But over time, she realized that her experience was not unique, that so many young girls and women like her suffered a similar fate in Muslim families. She wanted to give voice to these girls and women, by telling her personal story in which others could recognize their own experience. That is why she wrote her book Unveiled.

Quebec: Distinct from the ROC

In terms of secularism, Quebeckers are much more advanced than the ROC (Rest of Canada). Canadians continue to wallow in a senseless complacency with regard to Islam and Islamism. Why? Well, Quebeckers remember the time, not so long ago, only a few decades, when the local priest held an almost absolute authority over his parish. As Yasmine explained, there are remarkable parallels between the Catholic clergy of that time and the mentality of practicing Muslims: a very pronounced misogyny in both cases, with girls and women suffocated and subjugated. Quebeckers still remember that era, and that is why they understand the importance of secularism, to prevent religious obscurantism from interfering in the State or in schools.

Acts of Islamist terrorism are not necessarily frequent, but it does not take very many to have the desired effect. We all still remember the attack on Charlie Hebdo. More recently, the attempted murder of Salman Rushdie had a very sobering effect. Death threats must be taken seriously. The desired effect is silence, self-censorship or censorship, in order to stifle any criticism of Islam and the agenda of Islamists like the Muslim Brotherhood. And it works. Even without physical violence, accusations of so-called “Islamophobia” serve the same purpose as terrorism: to muzzle the necessary debate.

The Veil is Not a Matter of “Choice”

Remember Zunera Ishaq who went to court to win the right to wear a niqab at here citizenship ceremony? Pure foolishness! Objectively, the veil in all its forms, whether hijab or niqab or any other format, is a vehicle for the enslavement of women. This is true regardless of the attitude of the woman who wears it. Some women say they wear the veil by choice, but as Yasmine observes, it is never possible to know the real reasons why a woman wears it. The question isn’t even relevant and it’s none of our business anyway. The veil remains a marker of the Islamic “purity” of women who wear it and the impurity of those who do not. The veil indicates that the woman is held responsible for the behaviour of men, which implies that, if she is attacked or raped—even if she were wearing the veil at the time—she will be judged as guilty as her attacker, or even guiltier than him.

The veil is a “choice?” The very idea is absurd. Yasmine points out that in Muslim circles, every young woman is faced with the following “choice:” Wear the veil and be respected. Or do not wear the veil and be seen as a slut, a contemptible and worthless woman who will never find a husband. This is not a “choice.” It is a threat.

Although these observations apply to all formats of the veil, the niqab is particularly horrible. As for people like Justin Trudeau who claim that wearing the niqab is a right, Yasmine invites them to wear one, if only for one day. The niqab completely isolates the person wearing it. The wearer can see others, but the others do not see the niqabed woman. It is worse than physically suffocating. The wearer feels erased, as if no longer existing.

The Left, the Veil and Iran

There is a certain political left which propagates this absurd idea of the veil as a “choice.” Women are persecuted in Iran, especially those who dare to defy the obligation to wear the veil in public at all times, while in Western countries, this same left denigrates those women who dare to criticize Islam. It accuses them of fomenting hatred. It even accuses them of colonialism. This left does not hesitate to criticize Christianity or denounce the Christian far-right, but it remains complacently blind to the dangers of Islamism, which is also on the far-right. This left betrays its own principles. It is even racist, because it considers that the freedom to criticize a religion depends on the ethnicity of the believers.

But recently, thanks to the courage and combativeness of these Iranian women, the Islamist narrative has begun to crack, becoming less and less credible. Now, only the Islamists themselves and their useful idiots still believe the propaganda. Current events in Iran demonstrate that the problem is indeed Islam. It is no longer possible to deny it.

Western Women Who Convert to Islam

Some women in Western countries convert to Islam. This was the case for the first wife of the second husband of Yasmine’s mother, who was originally Québécoise. Why? According to Yasmine, this is explained by a naive ignorance of the consequences of this religion. The woman falls in love with a Muslim man, whose exotic origins fascinate her, and becomes his intimate partner without realizing what she is getting into. When she finally becomes aware of the extremely misogynistic nature of Islam, it is too late.

Priorities for the Future

A young woman asked Yasmine what her recommendations would be for young feminists. What actions should be given priority? According to Yasmine, we must categorically refuse any difference between the rights of women in the West and their rights in other countries. Women in countries with a Muslim majority must enjoy the same rights, the same freedoms that they demand here in Canada and in other Western countries. We must never accept religious constraints which would erode this equality. Yasmine thus makes an eloquent plea for universalism.

Moreover, in Western countries, it is necessary to set boundaries and limits. Immigrants from all countries are welcome, but that does not mean that their ideologies are welcome. We must be willing to say no when necessary, with measures such as secularism.

Finally, we must remain vigilant. Women’s rights, like secularism, are never perfectly assured. Misogynistic obscurantists remain on the lookout, ready to take advantage of any complacency to try to impose themselves again.

Don’t forget! Yasmine Mohammed will be our special guest at
our November 19th event.

One comment on “2022-10-20: Launch of French Version of Unveiled by Yasmine Mohammed”