An initiative of the Council of Ex-Muslims of Britain (CEMB)
which we, Libres penseurs athées—Atheist Freethinkers, endorse. 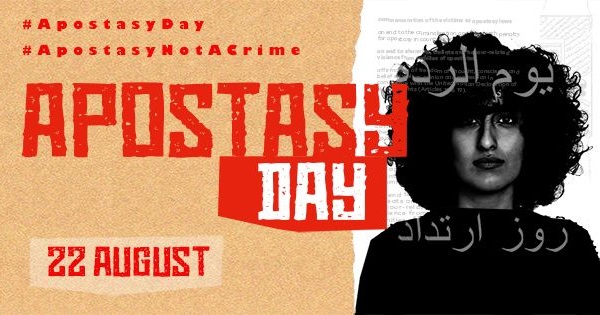 22 August 2020 is being established as the first Apostasy Day by an international coalition of ex-Muslim groups. Apostasy (ردة‎ or ارتداد) is the abandonment or renunciation of religion. It is a criminal offence in 16 out of 49 Muslim-majority countries and is punishable by death in Afghanistan, Iran, Malaysia, Maldives, Mauritania, Qatar, Saudi Arabia, Somalia, UAE, and Yemen. In Pakistan, a disbelief in God is punishable with the death penalty under a blasphemy law. In Saudi Arabia, atheism is equated with terrorism. In some countries without the death penalty, Islamists kill those deemed apostates, including in Bangladesh and Muslim-minority India. In many countries, such as in Europe and North America, apostates can face threats, shunning and honour-based violence, including from their families. Individuals from Orthodox Jewish, Christian, Hindu and other backgrounds can also face shunning and violence for apostasy.

22 August is being chosen as Apostasy Day because it is the UN Day Commemorating the Victims of Acts of Violence Based on Religion or Belief. Moreover, late August marks the start of a second wave of mass executions of apostates in Iran in 1988 after brief “trials”. Thousands who responded negatively to questions such as ‘Are you a Muslim?’, ‘Do you believe in Allah?’, ‘Is the Holy Qur’an the Word of Allah?’, ‘Do you accept the Holy Muhammad to be the Seal of the Prophets?’, ‘Do you fast during Ramadan?’, ‘Do you pray and read the Holy Qur’an?’ were summarily executed.

On the newly established Apostasy Day, we renew calls for: