Blog 122: The Abysmal Hypocrisy of CFI-Canada

Centre For Inquiry – Canada (CFI-Canada or CFIC) is a Canadian organization originally founded as an outgrowth of the major American humanist organization CFI with which it is still affiliated. Despite its claim of promoting secularism, the anti-secular tendencies of CFIC have been obvious for many years. In 2013, CFIC opposed the Secularism Charter of the Parti Québécois government of the time. Years later, on 17th June 2019, the day after Quebec adopted its Bill 21 (Loi sur la laïcité de l’État), the organization issued a press release denouncing that law and at the same time asserting a very curious interpretation of the concept of State religious neutrality. According to CFIC, withdrawing a religious privilege from a civil servant—the privilege of engaging in religious displays while on the job—constitutes a violation of that neutrality! 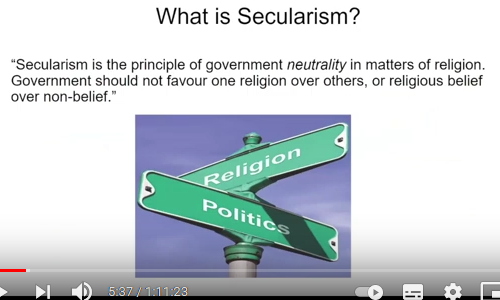 Recently, on 28th January 2021, we obtained very clear confirmation of CFIC’s anti-secularism, when Leslie Rosenblood, spokesperson for CFIC on matters of secularism and policy advisor for the partner organization Canadian Secular[sic] Alliance (CSA), gave an on-line talk entitled “Secularism in Canada.” The speaker declares that both organizations oppose Bill 21 and explains the definition of secularism (see Figure 1) which they have adopted. Here it is:

“Secularism is the principle of government neutrality in matters of religion. Government should not favour one religion over others, or religious belief over non-belief.”

As a definition of religious neutrality, this works fine. It even declares strong neutrality, that is to say, it includes equality between belief and non-belief. However, this nice definition is incompatible with the wearing of religious symbols by State employees, because that involves a privilege accorded to religious believers but not to non-believers. Thus CFIC’s and CSA’s opposition to Bill 21 is incompatible with their own definition. But most importantly, it is certainly not a definition of secularism. 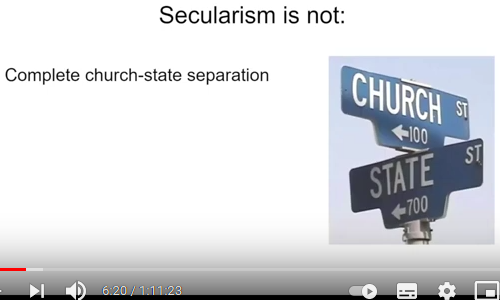 Here is the problem (see Figure 2): the definition of secularism adopted by CFIC and CSA does not include separation between religions and State! If Thomas Jefferson were alive today, he would be scratching his head watching Rosenblood’s video. Although the First Amendment of the U. S. Constitution (which Rosenblood praises as “very secular” which it is not) does not implement secularism (in reality it merely forbids the establishment of a State religion), Jefferson would have preferred that it be interpreted as such, as is obvious from his famous Letter to the Danbury Baptists. It was in that document, dated 1st January 1802, that Jefferson referred to “a wall of eternal separation between Church & State.”

But CFIC and CSA reject the principle of separation! There are numerous definitions of secularism, but this is the first time I have met one which explicitly excludes separation. The implications are dramatic. Without separation, the other aspects of secularism are seriously weakened. Even the religious neutrality proposed in the talk would be robbed of its strength—equality between belief and non-belief—if not accompanied by separation.

By taking this bizarre stance, CFIC accomplishes a rather astonishing trick: it renders itself simultaneously more honest and more dishonest. How does it accomplish this paradoxical feat? The organization has not respected separation for years so, by finally admitting this, it becomes more transparent. However, at the same time, by adopting a definition of secularism which excludes separation, CFIC is playing a very dishonest game: pretending to be secular while rejecting the key element of secularism.

Why would they do this? The answer is obvious: out of pure cowardice. CFIC wishes to maintain its opposition to Bill 21, because it lacks the courage necessary to defy the vicious campaign of hatred and fanaticism currently raging in Canada and directed against Bill 21 and against Quebec. Thus, in order to continue to call itself “secular,” CFIC pulls a rabbit out of a hat, or rather, a new definition of secularism out of nowhere, a definition which now conveniently fits better with that shameful opposition. On the other hand, if I am mistaken and CFIC in fact agrees with that reactionary campaign against secularism, then the situation is even worse than I thought.

The recent judgment of Quebec Superior Court in the case contesting Bill 21 is very revealing of the implications of CFIC’s decision. The Bill was partially validated, but only thanks to “notwithstanding” clauses. The judgment is very hostile to secularism and to Bill 21, even declaring that banning the wearing of religious symbols violates “the soul or essence” of believers who simply wish to respect the law of their “God” which Bill 21 fails to recognize. This is why, according to the judge, religious symbols are much more important than political symbols.

Thus, Justice Blanchard does us a great service, exposing clearly in his judgment the implications of opposition to Bill 21. For years now, I have been explaining in my writings that so-called religious obligations are fictional, just myths. On the other hand, if we want to take such obligations seriously, for example the obligation to wear a certain symbol, then it becomes necessary to invoke a “soul” or “laws of God” in order to justify that obligation, in order to explain just how it is that religious symbols become supposedly essential.

So, where will CFIC and CSA go from here? Will these organizations adopt, in the near future, the position that the soul exists, in order to rationalize their opposition to secularism and to Bill 21?

4 comments on “Blog 122: The Abysmal Hypocrisy of CFI-Canada”