Blog 121: Controversy about Islamoleftism in France

A storm is currently raging in France: a furious controversy concerning the term “Islamoleftism” (« islamogauchisme » in French). Frédérique Vidal, Minister of Higher Education declared on February 14th 2021 (on the television network CNews) that Islamoleftism is a plague on society in general and that universities are not immune to it. Jean-Michel Blanquer, Minister of National Education, lent his support to his colleague Vidal, declaring that the word Islamoleftism describes a real political phenomenon. In October 2020, Blanquer denounced the “ravages” of Islamoleftism in universities.

A recent poll in France indicates that some 66% of those polled approve of Minister Vidal’s assertion, while 69% are of the opinion that an attitude of complacency towards Islamism is indeed a reality among leftists.

The expression « islamogauchisme » was coined in 2002 by the historian of ideas Pierre-André Taguieff to describe a de facto alliance between Islamists and far-left militants in support of the Palestinian cause which they elevated to the status of a new great revolutionary cause of universal importance.

As for the ideological presuppositions which unite Islamists and leftists, Taguieff identifies the thesis that “Islamophobia” constitutes the principal form of racism, at the heart of political antiracism. This implies that their common enemy is characterized as either “racist” or “Islamophobic.” On the far left, this Islamified antiracism tends to replace the antifascism of traditional communists. We can see in these attitudes and behaviours the results of the strategy of the Muslim Brotherhood which manipulates guilt and victimization to conquer Western opinion. Thus, the Occident, whether “miscreant-islamophobe” (to use Islamist language) or “capitalist-racist” (to use leftist language), is always the only culprit.

According to the French philosopher Pierre-Henri Tavoillot, the concept of Islamoleftism is based on three key ideas:

And finally, here is my definition: Islamoleftism is a degenerate form of left-wing politics in which the priority which the left traditionally accorded to questions of class is now replaced by the defence of minorities, especially Muslims, as if Muslims constituted the new working class (as in Marxist ideology) or the new chosen people (as in Abrahamic mythology). Islamoleftists display an attitude of complacency with regard to political Islam, i.e. underestimating or ignoring the danger which it represents. They also adopt an attitude of respect for, admiration of or submission to Islam or even Islamism, but not as believers; rather, as non-Muslims who oppose frank criticism of Islam (while hypocritically allowing such criticism of other religions) and who tend to vilify anyone who does criticize Islam, usually by accusing them of “Islamophobia.” Furthermore, their concern for Muslims tends to be strongly biased towards the most visible, pious, and fundamentalist Muslims while ignoring secular Muslims. 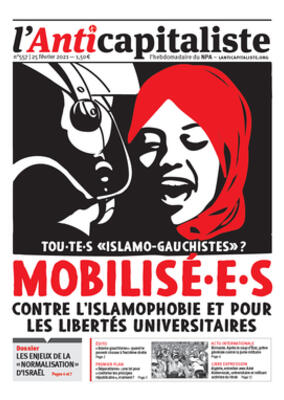 An example of severe Islamoleftism,
including denial of its very existence and,
as usual, accusation of “Islamophobia.”

Of course Islamoleftists themselves vigorously deny the very existence of the phenomenon. But it is obvious to any reasonable person who is sufficiently well-informed that Islamoleftism is indeed real. We see its presence, and its ravages, in so many places. Indeed, it was because of the pronounced Islamoleftism of the Féderation Nationale de la Libre Pensée (FNLP) that we, Atheist Freethinkers decided to withdraw from the International Association of Free Thought (IAFT), a coalition founded by the FNLP and whose priorities follow those of the FNLP. The paper To debate about Islam rationally by Christian Eyschen of the FNLP is a clear example of Islamoleftism, a work of remarkable intellectual dishonesty.

Islamoleftism is a major component of the anti-Enlightenment pseudo-left ideology which is often referred to as the “regressive left” or the “woke.” Furthermore, it should be pointed out that Islamoleftism is not really leftist because, as I explain in my article The “Woke” are Not the Political Left, Part I, a movement which abandons Enlightenment values is no longer on the left.

In fact, we can observe the influence of this harmful political tendency in any movement that claims to be on the left but displays an exaggerated complacency for Islamism, and this influence rubs off even on the political centre or centre-right (such as the Liberal parties of Canada and of Quebec).

The history of Islamoleftism goes at least as far back as the Iranian revolution of 1979 (and perhaps even further), when several leftists lent their support to ayatollah Khomeyni in the hope that he might represent the first step in an anti-imperialist revolution, somewhat like Kerensky in Russia in 1917. But the Islamists hijacked the revolution, suppressing and massacring the Communists who were their erstwhile allies.

One of the important texts of Islamoleftism, “The Prophet and the Proletariat,” by the English Trotskyist Chris Harman, explains the essential ideas behind the Islamoleftist agenda:

On some issues we will find ourselves on the same side as the Islamists against imperialism and the state. This was true, for instance, in many countries during the second Gulf War. It should be true in countries like France or Britain when it comes to combating racism. Where the Islamists are in opposition, our rule should be, “with the Islamists sometimes, with the state never”.

The left has made two mistakes in relation to the Islamists in the past. The first has been to write them off as fascists, with whom we have nothing in common. The second has been to see them as “progressives” who must not be criticised.

Notice that Harman expresses an absolute opposition to the State, even if that State is threatened by Islamists. He claims that the Islamists are not fascists! On the contrary, I would say that if we place Islamism on the left-right political axis, it is located to the right of fascism as manifested in several countries over the course of the 20th century, including Naziism. Imagine a scenario in Germany in the 1920s when the anticapitalist left would strike up an alliance with the Nazi Brownshirts in opposition to the State of the Weimar Republic! In fact, historical reality was not so very far from that hypothetical scenario: indeed, in the late 1920s and early 1930s, the German Communist Party (KPD), following Stalin’s orders, adopted the position that the true fascists were the Social-Democratic Party (SPD) which the KPD labelled “socio-fascist” and considered worse than the Nazis! Thus, the KPD and their paramilitary wing Antifaschistische Aktion—which modern Antifa activists take as a model—directed their anti-fascist activities more against the SPD and, in doing so, contributed indirectly to the rise of the Nazis.

Notice as well that Harman shows a dangerous tendency to conflate religion and race when he talks about the Islamic veil. Indeed, Harman apparently opposes any ban on the wearing of religious symbols (Islamic, at least) and associates such a ban with “racism.” Note furthermore that Harman declares himself “for the right to criticise religion” but that, in reality, Islamoleftists are very intolerant of any frank criticism of Islam. In fact, his allusions to racism and the “right” to wear the veil are indications of this intolerance.

To summarize, Islamoleftism is an ideology and a school of thought which has participated in the degeneration of the political left for several decades, a degeneration which accelerated after the fall of the Soviet Union in 1989 and the collapse of the dream of a proletarian anticapitalist revolution. It is part of a toxic mixture of ideologies which, as Frédérique Vidal expressed so well (and to the displeasure of Islamoleftists themselves), plagues our societies by moving us away from the liberating values of the Enlightenment—and not only in France. Its harmful influence is very much felt in Canada, in the United States and in Great Britain as well as in several other countries.