Recently, the idea of declaring January 29th an official day against so-called “Islamophobia” has been floated yet again. It was proposed last year by the National Council of Canadian Muslims (NCCM) on the occasion of the first anniversary of the Quebec City mosque attack, but was fortunately not implemented. This year, around the time of the second anniversary, proponents of that idea were on the offensive again.

The response of the Premier of Quebec, François Legault, was both rapid and categorical: No! There will be no day againt Islamophobia. Only two days after the anniversary date, he even declared that there is no Islamophobia in Quebec. Not surprisingly, this did not please everyone. The NCCM demanded that Legault retract his declaration, while Boufeldja Benabdallah of the Grande Mosquée de Québec said he felt “betrayed” by the Premier’s words.

The day after that statement, Legault modified his words somewhat, conceding that, yes, there is Islamophobia in Quebec, but nevertheless no Islamophobic current of thought. He added that it is important, indeed our duty, to continue to honour the memory of the 6 victims of the tragedy at the Quebec City mosque each January 29th. However, he maintained his opposition to an official day against “Islamophobia.”

Ex-MNA Fatima Houda-Pepin, in an article in the Journal de Montréal, Cessons de barbouiller le Québec (Stop Denigrating Quebec), expressed a similar sentiment. We have a duty to remember and honour the victims, wrote Houda-Pepin. However, to exploit their deaths by demanding that January 29th be declared a national day against “Islamophobia” is part of a political agenda which must be rejected.

In my opinion, Premier Legault displayed exemplary courage in clearly and firmly rejecting that very bad idea. The pressure on him, trying to make him backtrack, is enormous. But as I write these lines he has so far resisted that pressure with equanimity and resolve.

We of Atheist Freethinkers have always denounced the use of the dishonest term “Islamophobia” and rejected the idea of a day of commemoration in its name. A year ago, I authored a blog explaining my opposition to the idea. You can find several other articles on this issue on our website: simply enter the word in the search box.

In fact, Premier Legault was right to say that Islamophobia does not exist in Quebec for the simple and obvious reason that it does not exist anywhere. The word is clearly devoid of sense if one takes the trouble to consider its true meaning. The suffix “phobia” implies an irrational fear, but to fear Islam or any other religion is certainly not irrational. On the contrary, it is simply prudent to be concerned by it.

If we consider the tenets of various religions, and of Islam in particular, there is evidently much to fear. Take just one example: apostasy, i.e. the act of abandoning one’s religion. Apostasy is formally forbidden in Islam and that stricture is part of mainstream Islamic doctrine (not some radical variant). Furthermore, it is a criminal offense in many Muslim-majority countries, and is sometimes punishable by death! It must also be noted that, according to an important Pew Forum poll, millions of Muslims, or perhaps tens of millions, express their agreement with the death penalty for apostasy. It would be crazy not to fear such a religion. 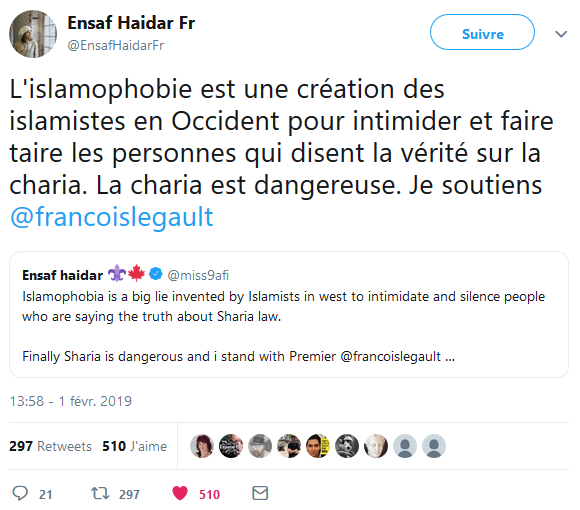 Basically, accusations of “Islamophobia” have an obvious purpose: to stifle necessary criticism of Islam and Islamism. In the words of Ensaf Haider, wife of Raif Badawi who remains imprisoned in Saudi Arabia: “Islamophobia is a big lie invented by Islamists in west to intimidate and silence people who are saying the truth about Sharia law.”

Beyond these considerations, the idea of an official day against Islamophobia raises a whole range of problems. It would represent a privilege granted to one religion in particular, to the detriment of other religions, and especially to the detriment of non-belief. One example: atheophobia is a real phenomenon, a real prejudice, promoted by the various monotheisms, including Islam, but no-one (not even we atheists) has proposed a day against atheophobia. Furthermore, ideas do not deserve special protection; rather it is human beings who deserve it.

The partisans of political Islam have already exploited that horrible massacre of January 29th 2017 in order to promote their program. They have succeeded in having the Parliament of Canada adopt a motion (M-103) which not only condemns so-called Islamophobia but which also conflates race and religion, thus confusing the two and allowing Islamists to make false accusations of racism against their critics. They have also tried to stigmatize and blame all Quebeckers for the heinous act of a single tormented individual. This looks very much like hate propaganda against the Québécois, denigrating them as an ethnic group, painting them all as hideous racists.

It is therefore in the context of this tsunami of propaganda that François Legault’s determination shows its significance. Let us hope that he stands strong throughout the coming months. He will need courage in order to carry out the secular measures that his government has promised. And on that note, we have another reason for optimism: Legault recently remarked that his government has already displayed its willingness to compromise by limiting the religious symbol ban to public servants who hold positions of authority, rather than all. This implies that Legault recognizes that the ban should in principle apply to all employees of the public service. In other words, he understands the limitations of his party’s current proposals and the eventuality of completing them at some time in the future.

We must also hope that Legault will have the fortitude to resist the idea of a grandfather clause which would grant an exemption for public servants hired before the ban comes into effect. Such a clause would create inequalities and unmanageable situations, as André Lamoureux, spokesperson for the Rassemblement pour la laïcité (Alliance for Secularism), has recently pointed out.