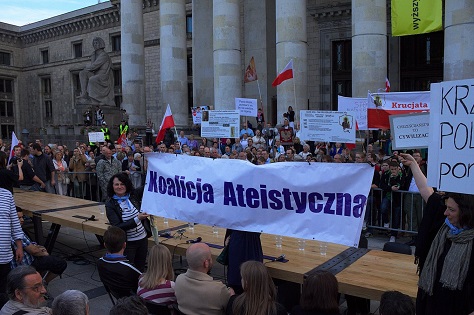 During a recent trip to Europe, I had the pleasure of meeting four members of Koalicja Ateistyczna or Atheist Coalition, a sister organization of ours on Polish soil, located in Warsaw. I was introduced to Marek Łukaszewicz, president of KA, Darek Kedziora, vice-president, Nina Sankari, vice-president and Krzysztof Mlynarczyk.

I prepared a few questions with the goal of getting to know the Coalition and its particular context. How is it similar to ours? In what ways does it differ? It is in a spirit of friendship that I summarize here the answers which our Polish friends, through Nina Sankari, have provided me. 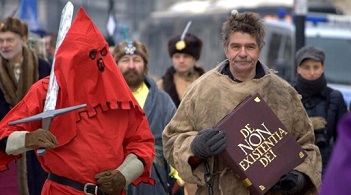 What did I learn from this wonderful evening spent in the company of our Polish atheist friends? A very good first impression! In fact, I recommend that we strengthen our relatioins with the Coalition, as their determination and dynamism can only benefit us.

Indeed, I felt as if I were among you, dear AFT members, and it was only the language which reminded me that I was not in Montreal or Gatineau. For example, the number of members is similar to ours; their financial situation as well. Their vision of atheism matches ours perfectly as they take a more activist and unequivocal approach as do we. They criticize agnosticism as lukewarm, even insipid. Like us they have no interest in the dubious idea that religious beliefs should be given deferential treatment. Finally, our Polish friends make a clear distinction, as do we, between religious beliefs and religious believers, the latter being the victims who are “infected” with the former, which does not however imply – and I think you will agree – that we should avoid a good debate with them or never exercise restraint in the use of our arsenal of arguments.

However, Poland reminds me of Quebec in the 1950s. Collusion between the Catholic Church and the state is obvious. Catholicism clings to its privileges, intervenes in political affairs and obviously defends its privileges tooth and nail by crying “blasphemy” whenever necessary, as evidenced by the withdrawal of the play Golgotha Picnic. Furthermore, few public figures in the worlds of politics or business dare to declare themselves openly as atheists for fear of electoral or economic retaliation. The situation is much more challenging than ours and militant islamism is completely absent from the Polish landscape. This is, I think, what distinguishes their situation from ours.

To conclude, please allow me to formulate this important historical reminder. Here in Quebec, Catholicism may no longer exercise the great power over our daily lives is that it had to concede since the 1960s. But never forget what it was like when our own Catholic church was married to political power. We can only hope for the advent of a “quiet” revolution in Poland in the near future and closer ties among associations such as ours everywhere in the world. 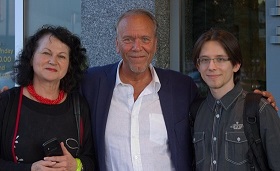 Nina Sankari, myself and Krzysztof Mlynarczyk
(Click to see the photo full size)