On Sunday the 18th of August, our organization participated in the Montreal LGBT (Lesbian, Gay, Bisexual, Transgender) pride parade, forming a small contingent on foot. We carried a large banner (see photos 1 and 2) with the words “HOMOPHOBIE : VIRUS PROPAGÉ PAR LES RELIGIONS” (Homophobia: Virus spread by religions) emblazoned in bright red, as well as a small banner displaying the name of our organization in both languages. This was not our first participation in the parade; we were there in 2010 as well.

Why participate in this event? As atheists we promote freedom, including sexual freedom, especially if threatened by the power and obscurantism of religion. And indeed, the greatest threat to gays and lesbians comes from various religions and their allies. Many religious authorities, claiming to have an intimate knowledge of a non-existent supernatural being, have the arrogance to declare that homosexual acts are against the will of “God.”

Reducing sexuality to reproduction only, contemptuous of sexual pleasure and ignoring the central importance of the emotional relationship between sexual partners, these various monks and popes condemn any sexual act whose purpose is not reproduction. Other reactionaries, preferring a more pseudo-scientific sounding expression, declare that homosexuality is “unnatural” even though its occurrence is widespread in the natural world. However, no intentionality can be ascribed to either “God” or mother nature. These two moralistic attitudes are essentially equivalent and both are dangerous nonsense which threatens the freedom and quality of life not only of gays but of everyone.

At the same time, our participation in the march served to promote both our cause and our organization. But more importantly, our message reminds the public, especially the homosexual public – whether in the parade itself or lined up along the sidewalks of René-Lévesque boulevard – of an essential observation about how to fight homophobia: unless religious dogma is explicitly criticized, it is impossible to protect the rights and freedoms of gays (or, it must be added, of women). Over the years this march and similar ones in other cities have become increasingly commercial. The political activism which was so central to these demonstrations in the beginning has been diminished. Currently they appear almost devoid of the political content which they once had – except for a few political celebrities representing parties probably more interested in votes than causes. This reminder of the largely religious origins of homophobia is essential, and it is what we as an atheist association can contribute.

Furthermore, despite the modest size of our contingent, our main banner generated a lot of positive reactions from the public. We had to stop several times to allow photographers to get a good shot of it, and its strong and relevant message was much appreciated.

Several days previously, on a Tuesday evening, several of our members joined a vigil of about a thousand persons (see photo 3) in front of the Russian consulate in Montreal. We were there to protest against the new draconian Russian law which forbids so-called homosexual “propaganda,” thus depriving Russian gays of their freedom of expression and assembly, exposing them to repression and violence, sometimes deadly. The Putin government, supported of course by the Russian Orthodox Church and echoing the era of Stalin who criminalized homosexuality (whereas the Bolsheviks had decriminalized it a decade earlier), thus gives a green light to the most virulent homophobes. The vigil as well as the parade on the following Sunday, both sponsored by the organization Fierté Montréal, would have been illegal in Russia and their participants roughed up by thugs.

At the parade, a large number of associations and groups of course participated. In front of us a small group opposing unnecessary circumcision brandished a banner displaying the curious declaration “Foreskin Pride.” I guess you could say that the word “pride” was a little overused that day. But we nevertheless had something important in common with them, because as atheists we must oppose any medically unjustified mutilation of the human body without the consent of the person concerned – thus we must oppose circumcision of newborn boys for religions purposes, and we must also oppose the (much more serious) practice of female genital mutilation.

A gay seniors club followed us in the parade, and behind them the SPCA (Society for the Prevention of Cruelty towards Animals). Supporters of the SPCA are perhaps unaware of this, but monotheistic religions with their belief in the human soul, as well as their idea that man should dominate all of nature, are in part responsible for this cruelty. If only humans possess a soul, and if the soul is the locus of feeling as these religions claim, then the suffering of animals can be dismissed as unimportant. This mentality opens the door to practices which cause unnecessary suffering for non-human animals, for example techniques of ritual slaughter such as halal and kosher.

We thank those members who joined our contingent in the march in order to affirm proudly our presence as atheists and our support for LGBT rights. I would especially like to thank one individual who is not even an atheist but who joined us enthusiastically, partly in order to accompany his life partner who is one of our members, but in particular because he was 100% in agreement with our message denouncing religious homophobia. Bravo! 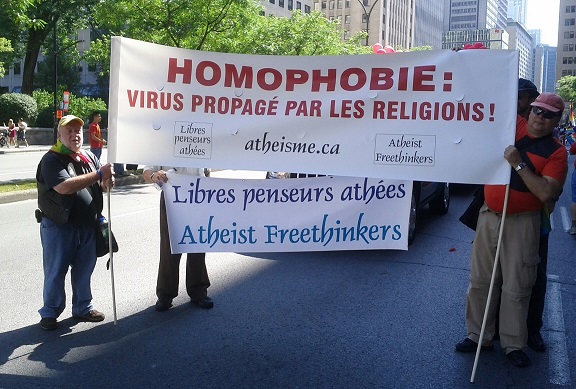 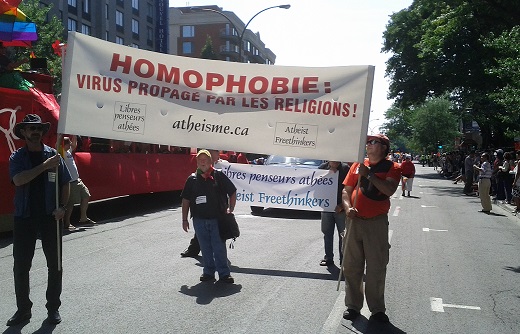 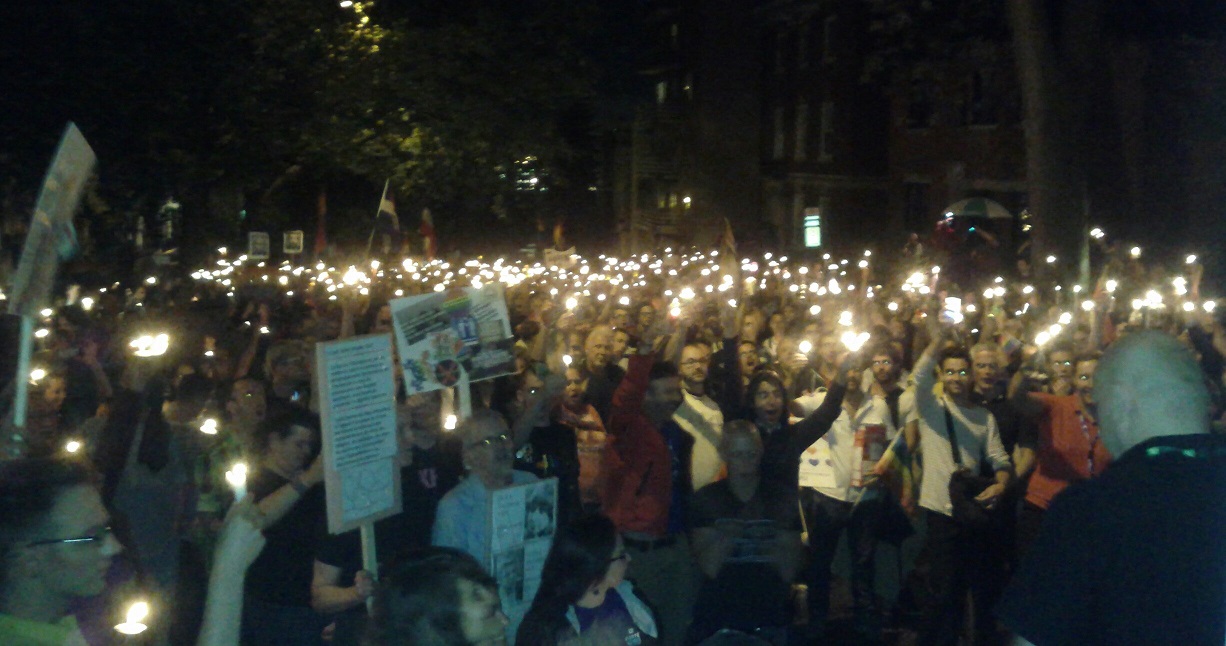