Of Censuses and Secularism

In this installment of the AFT blog, David Rand considers the implications for secularism of the recently released result of the 2011 National Household Survey.

Statistics Canada recently released the results of the 2011 National Household Survey (NHS) which replaces the Census done in previous years. There are various problems with the NHS data, not the least of which is the fact that, unlike previous censuses, participation is now optional. This dubious and highly contested decision by the Harper government greatly reduces the quality of the data collected. When studying the question of religion, the problem is compounded by the fact that – and this applies also to previous censuses – the question put to respondents involved the religion in which the individual was raised rather than one’s current beliefs or lack thereof. This has the effect of seriously biasing results in the direction of parents’ religious affiliations. Thus, in the context of growing levels of non-belief, this practice under-represents atheists, agnostics, humanists and others with no religious affiliation.

With these reservations in mind, let us nevertheless take a quick look at the results of the 2011 NHS for religious affiliation and compare them to results from the 2001 census. In the first graph, which is based on absolute numbers (i.e. not relative to the total population, which increased from about 30 to 33 million in the intervening decade), we see that the number of Protestant Christians has fallen considerably while the numbers of Other Christians, Muslims and those with No religious affiliation have all increased substantially. 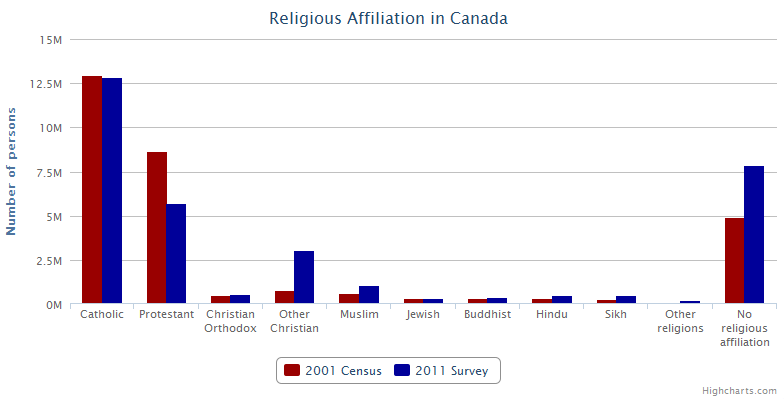 In the second graph, the numbers are expressed as percentages of total population in the given year. Here we see results similar to those in the previous graph, with the additional observation that the percentage of declared Catholics has fallen significantly. 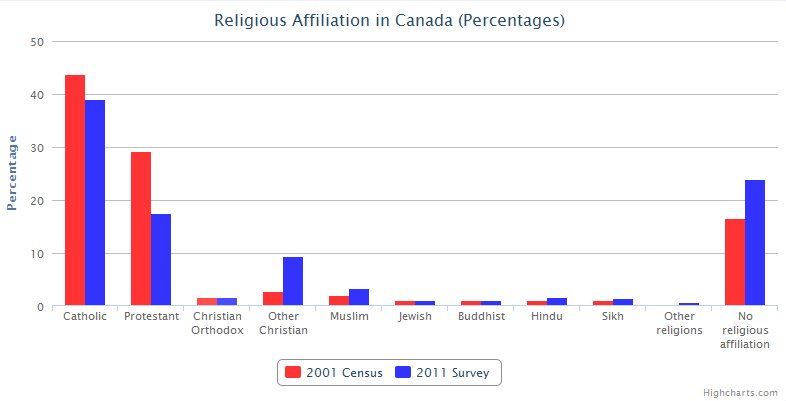 There are other conclusions that can be advanced by breaking down the NHS and census data according to, say, province or immigrant status. But the important point I wish to emphasize here is the major increase in the numbers of persons who declare no religious affiliation, an increase which remains significant after taking population growth into account. Of course only some of these respondents are atheists, but we can nevertheless conclude that absence of religious belief is an increasingly common phenomenon in Canada.

What are the implications of this observation for advancing secularism?

We know that the main reason an individual adopts particular religious beliefs is a mere accident of birth: i.e. one is indoctrinated as a child into the beliefs of parents and community. And if those beliefs or the trappings of them are maintained into adulthood and subsequently passed on to children, it is undoubtedly more often a result of conformism and inertia rather than real conviction.

Can this cycle be broken, so that freedom of conscience is finally respected, i.e. so that religions are practised mainly by those who do so as a result of an informed adult choice rather than an imposition during childhood? Yes, it can and must be broken, and in my opinion there are two principal means to do so. First and foremost is universal secular public education of the highest quality, exposing children to a wide spectrum of ideas beyond those which they generally encounter within their family or community, so that they may make informed choices when they reach maturity.

The second means is to engage in principled criticism of religion, in particular the monotheisms such as Christianity and Islam which hold such sway in so many countries, explaining and exposing the dangerous moral arrogance and vacuity which are the kernel of each monotheism. Founding morality on the unknown will of a hypothetical supernatural god leads inevitably to some individuals setting themselves up as spokespersons for that god, with concomitant abuses of that contrived moral authority.

Unfortunately, in an effort to attract “moderate” religious believers as allies and thus broaden the support base, some secular activists propose toning down criticism of religion. It is regrettable that such a retrograde option should still be considered even today in the year 2013. This option is based on either-or reasoning, a zero-sum scenario where it is simplistically assumed that criticism of religion and promotion of secularism are mutually exclusive. On the contrary, they complement each other.

Trying to recruit a wider base to support secular goals is a perfectly reasonable thing to do, but self-censoring anti-religious criticism in order to do so is not. Monotheism is a scam whose field of application is morals and ethics, and this is true regardless of the level of sincerity of its adherents. Asking secular activists to put a lid on their criticism of this fraud is like asking scientists to tone down their criticism of pseudoscience for fear of offending astrologers, homeopaths and creationists.

Indeed, if religious persons are sincerely convinced that their beliefs are necessary for morals and ethics, then how can we possibly expect them to support secularism? If such beliefs make one a better person, as many of the religious assert, then of course they will want to live in a better society, i.e. one in which religion has a significant role to play – and, in their opinion, a salutary role – in government and state.

The idea of toning down criticism of unsubstantiated beliefs, otherwise know as “respecting” those beliefs, is backward-looking. It is based on fear and is a recipe for stagnation. It is what the vast majority of non-believers have been doing since time immemorial: shutting up for fear of repression, sometimes violent, by religious authorities. And it favours the status quo because it assumes implicitly – as does the ideology of multiculturalism – that people are essentially defined by the religious community in which they were raised. This is a major mistake.

That is the lesson to be learned from the Census and NHS data displayed in the graphs. Statistics Canada refuses to ask about the person’s own current religious affiliation or beliefs and stubbornly continues to consider only childhood affiliation. Labelling respondents in this way is unfair to the individual because it fails to recognize one’s freedom to evolve. It is also bad statistics because it skews the data in favour of religion. And yet, despite that serious bias, the data still indicate a move away from religion. I think it is reasonable to assume that there are massive numbers of closeted atheists or at least closeted doubters hiding among the religious. We need to reach them, and we cannot do that without principled criticism of unsubstantiated beliefs, while of course assuring freedom of conscience.

We must not put a lid on our criticism of religion. We must do precisely the opposite. Indeed, we atheists and secularists (the two groups overlap enormously) have only begun to make our voices heard. We must continue to encourage non-believers to come out of the closet and we must continue to point out the specious, baseless and dangerous nature of religious belief in order to motivate then to do so. Some believers will inevitably be offended, they will whine and call us intolerant as they do already, but they are spoiled, for until recently we have generally been silent. But no longer!

To conclude, a reminder about two campaigns which allow non-believers to be counted anonymously.

If you are an atheist and have not already done so, please participate in both of these initiatives or, if you are not a Canadian resident, in the latter one. As both are voluntary and internet based, they are obviously not statistically rigorous. Nevertheless, they allow us to express our voice and our existence and to be counted!