Most Quebecers are in favour of banning public-sector workers from wearing religious symbols, according to a CROP poll released ahead of the first legislative session under a Coalition Avenir Québec government. […]

Premier François Legault indicated after last month’s election that he will seek to bar civil servants in positions of authority from wearing religious symbols such as the kippa and hijab. Not only would this apply to police officers, judges and Crown prosecutors, but also to school teachers, Legault said. […]

The CROP poll, taken between Nov. 14 and 19, estimated that 72 per cent of Quebecers supported banning visible religious symbols for judges, 71 per cent supported banning them for prosecutors and police officers and 65 per cent backed extending the ban to public-school teachers.

This is the lastest in a series of polls done over the years which indicate that the Quebec population is solidly in favour of secularism, including the necessary ban on religious symbols worn by public servants. 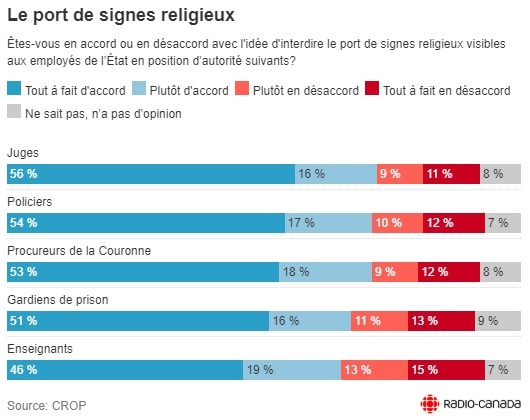 The graph indicates the percentage of those polled who are
strongly for, somewhat for, somewhat against, strongly against or express no opinion about
a ban on the wearing of religious symbols by
judges, police, crown prosecutors, prison guards and teachers.