This talk was presented at the event Atheist Days 2017 (Dni Ateizmu 2017) held in Warsaw, Poland, and organized by the Kazimierz Lyszczynski Foundation

Judaism, Christianity & Islam (in historical order): These three religions are:

The centrepiece of each of these monotheisms is a Papa-Policeman-Dictator in the sky. They thus have strong totalitarian tendencies. Indeed, in the opinion of the French diplomat and biblical scholar Jean Soler, Judaism and its two descendants constitute the model for 20th century dictatorships such as Stalinism and Naziism.

With the Abrahamic monotheisms, the central question is one of power. This is certainly true in the domain of sexuality. The main concern of each religion is to control sexual behaviour and sex roles. Thus, there is a tight correlation between sexism and homophobia. Where sex roles are strictly enforced, sexual behaviour is strictly limited. Attitudes of misogyny are strongly correlated with attitudes of homophobia and hostility towards sexual minorities in general, for example transgendered persons.

The Catholic Church is a machine for generating sexual hypocrisy.

“When an entire caste of men—the Catholic clergy—is accorded divine authority but denied a rather basic human need, sexuality, then attempts to fulfill the forbidden need through abuse of that authority become inevitable. What else can one reasonably expect?

A priest is ostensibly God’s representative in his parish, and priests regularly use such power in order to manipulate and control their parishioners. It should come as no surprise that some will use it to obtain sexual favours. Combine this with the Christian condemnation of sexual pleasure in general and homosexuality in particular, and the fact that that condemnation is motivated by baseless dogma, and we have an explosive situation which the Catholic hierarchy has, until recently, been able to cover up and control.

The Christian Perspective is based on the bible, “the divinely inspired Word of God… Homosexuality is an illicit lust forbidden by God… perverted and unnatural vice…” Gay marriage is “absurd, unsound, ridiculously unreasonable, stupid…”

“human sexual orientations, whether heterosexual or homosexual, are a gift from God and part of the marvellous diversity of creation.” They (the UCC) “affirm and work toward the civil recognition of same-sex partnerships.”

BOTH approaches are baseless

Christian homophobia and Christian anti-homophobia are equally baseless, just as faith is baseless. That is, both approaches are based on an appeal to the will of “God”—which is unknowable. They are arbitary, retrofitting the religion to a pre-established desired attitude. (c.f. Euthyphro of Plato)

There is no objective Christian criterion allowing us to choose between the traditional and the liberal approaches in order to reach a moral conclusion. We must use non-religious criteria.

Fear of homosexuals or homosexuality is irrational, so this term is valid.

The suffix -phobia is usually interpreted as antipathy.

Fear of atheists or atheism is irrational, so this term is valid.

The suffix -phobia is usually interpreted as antipathy.

Fear of Islam (especially its political variant Islamism) is not irrational, so this term is invalid.

If the suffix “-phobia” is interpreted as antipathy, then this phenomenon may indeed be justified, even prudent and necessary, especially when dealing with Islamist variant of Islam.

The Imposture of Comparing Islamophobia and Homophobia

Drawing a parallel between these two is a tactic used by Islamists to justify their condemnation of so-called ”Islamophobia” (but which in reality is just blasphemy). The parallel is false because religious belief is acquired, not innate. Although somewhat fluid, sexual orientation is at least partially innate, and may not be easily changed like religious affiliation, which is completely acquired.

To compare Islamophobia to homophobia is to deny the freedom of conscience of Muslims, making them prisoners of the religion in which they were born.

The participation of our organization LPA-AFT in the 2015 Montreal LGBT pride parade.

Our slogan: “Homophobia: a virus propagated by religions!”

The participation of our organization LPA-AFT in the 2016 Montreal LGBT community day.

We were visited by two members of what I would call the “regressive left” and told that our slogan was bad because it would offend gay Muslims. 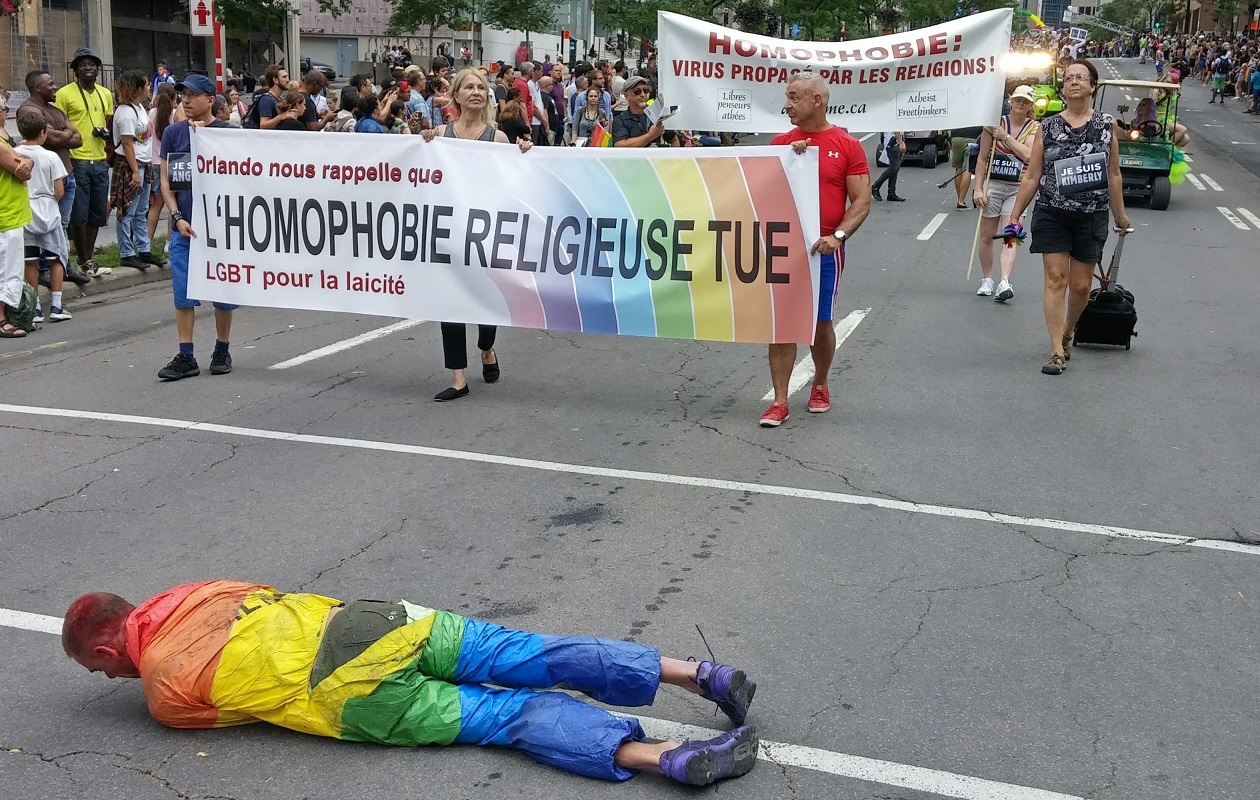 The participation of the organization LGBT pour la laïcité (LGBT for Secularism) in the 2016 Montreal LGBT pride parade, two months after the terrorist attack on an Orlando gay bar.

Gays for Islam versus Islam for Gays

This pair of photos illustrates the foolishness of some gay activists who waste their efforts denouncing “Islamophobia” when they should be criticizing religious homophobia, in particular Islamic homophobia.