The following is the text of the talk given by David Rand, president of Atheist Freethinkers, as participant in the blasphemy panel at the Non-Conference in Kitchener, Ontario, Canada on August 22nd 2015. 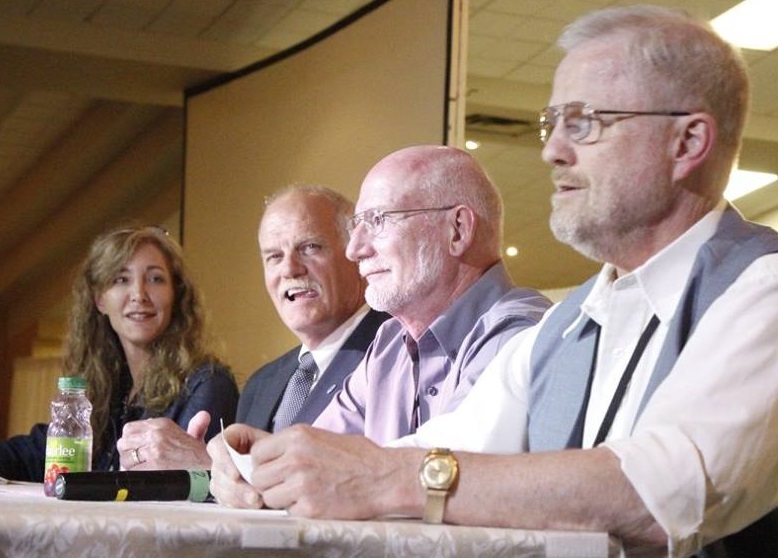 We all know that Canada has a law — section §296 of the Criminal Code — which prohibits “blasphemous libel” and that many other countries have similar legislation. We also know that all of these laws, even those rarely used, are a serious threat to human rights and must be repealed. That indeed is why we are here today, to work toward ridding humanity of these vestiges of an antiquated religious mentality.

But what, in point of fact, is blasphemy? Section §296 does not even bother to define the term. According to Wiktionary, blasphemy is defined as:

The first of these definitions is open to wide interpretation. If we use terms such as “sacred” or “inviolable” to describe those qualities or values which we consider to be very important to us, then in theory we could say for example that rejecting evolution is “blasphemy” against science and reason, or that unbridled pollution is “blasphemy” against the fragile earthly environment on which we depend for our survival.

However, we know that, in practice, only religions are so pretentious as to use the word “sacred” systematically and thus to elevate their ideas to the dizzying level of requiring legal protection against irreverence. From this attitude we see that the religious implicitly admit that their ideology is intellectually indefensible, for why else would they require such repressive measures to protect their ideas? Evolutionary and ecology theory certainly do not require such artificial protection. In practice, only the religious interpretation of blasphemy makes anti-blasphemy legislation such a danger for human freedom. Indeed, the other two definitions of “blasphemy” both involve some form of disrespect for the deity or deities, which confirms that we are definitely in the realm of religion.

You may have heard the adage that it is impossible for an atheist to blaspheme, because it is impossible to offend a non-existent entity! Indeed, if blasphemy means offending the divinity, then a person who does not recognize the existence of a divinity cannot possibly offend it.

And this is how anti-blasphemy legislation must, in my opinion, be interpreted and how it must be opposed. Such legislation is yet another manifestation of the egregious habit of granting special privileges to religious ideologies and to those who promote or subscribe to such ideologies.

This observation is amply illustrated by another provision of the aforementioned Criminal Code of Canada, a provision which occurs only a few sections after the blasphemy part. Sections §318–§320 deal with hate propaganda, while section §319 includes a number of so-called “defences” which make an otherwise offensive action unprosecutable. In particular, paragraph §319(3)(b) states that:

No person shall be convicted of an offence […] if, in good faith, the person expressed or attempted to establish by an argument an opinion on a religious subject or an opinion based on a belief in a religious text;

This provision exempts religious discourse from prosecution, thus granting a dangerous privilege to religions, permitting them to make hateful statements with impunity. This exception is very significant given that so-called “holy” books often incite the faithful to hatred of or violence against certain groups such as nonbelievers or homosexuals or certain ethnic groups. Indeed, it could be argued that most hate propaganda is motivated by religious beliefs, so that this exception grants impunity to the principal instigator of such propaganda.

These two provisions — the “blasphemous libel” section and the religious exception in §319(3)(b) — must be considered together, as similar manifestations of religious privilege with respect to freedom of expression. The first protects religions from insult by limiting our freedom to criticize them, while the second grants religions the privilege of impunity when maligning others, even if that discourse sinks to the level which, if it were not based on religion, would be considered hate propaganda. In both cases, religion has the advantage of a privilege not granted to others.

This symmetry between the concepts of blasphemy and hate propaganda which is manifest in the Canadian Criminal Code is very significant. Indeed, two recent developments — one on the international level, the other in Quebec — eloquently illustrate the insidious link between them.

Firstly, we are all aware of attempts by the Organization of Islamic Cooperation or OIC to have the United Nations condemn so-called “defamation of religion,” a measure which, if completely successful, would be tantamount to an international anti-blasphemy law. It has succeeded in having several non-binding resolutions accepted, despite opposition from many nations such as Canada and condemnation from human rights and free-speech activists. These resolutions typically employ language such as denouncing “religious hatred,” “intolerance,” “xenophobia,” etc. while often conflating religion and race.

Secondly, on June 10th the current Quebec government, that of the Liberal Party led by Philippe Couillard, proposed draft legislation, Bill 59, whose declared purpose is “to prevent and combat hate speech and speech inciting violence.” This bill would grant sweeping new powers to the Quebec Human Rights Commission (Commission des droits de la personne et des droits de la jeunesse or CDPDJ), allowing it to initiate investigations on its own without having received a complaint, to receive complaints anonymously without protecting the anonymity of the accused, to suppress speech before completion of an investigation, to impose exorbitant fines and to publish a list of the “guilty” on the internet.

Even more disturbing is the action plan against “radicalization” which the government released on the same day as the draft bill. The document describing the plan makes little mention of fundamentalism or Islamism, yet “Islamophobia” is mentioned repeatedly. Indeed, the document blames jihadist radicalization on “prejudice” in general and “Islamophobia” in particular, while not even considering the obvious cause which is the extremist ideology of Islamism. This is completely backwards: if prejudice against Muslims exists, it is caused by Islamist radicalism more than the other way around.

Furthermore, back in December of 2014, during an interview with Radio-Canada, Commission president Jacques Frémont justified the idea of extending the Commission’s powers against so-called “hate speech” by referencing resolutions going in that direction adopted by UN authorities. He was clearly referring to the various so-called “defamation of religion” resolutions, but without mentioning that these resolutions were from the OCI pursuing its usual Islamist agenda.

It must not be forgotten that the current Couillard government came to power by defeating the previous PQ government which introduced a Charter of Secularism, probably the best secular legislation ever proposed in any Canadian jurisdiction and which was at the centre of the election campaign. The most controversial aspect of that Charter was a dress code for public servants while on duty, a dress code which very reasonably limited displays of partisan religious affiliation just as Quebec legislation already limits displays of partisan political opinion in the public service. That is, it removed a religious privilege.

The Charter of Secularism was defeated by a de-facto alliance between multiculturalists and islamists who, together, denigrated the Charter and its supporters in ways very similar to the language used by the OCI resolutions. The privilege of blatantly displaying one’s religious affiliation while on the job was of course rebranded “religious freedom” in the distorted vocabulary of Charter opponents.

Couillard’s Liberals rode that wave of antisecularism to the fullest and got themselves elected with much support from fundamentalist Muslims. They are now paying those allies back by blaming jihadist radicalisation on so-called “Islamophobia” rather then on Islamist propaganda, and by implementing what promises to be in practice a new anti-blasphemy law at the provincial level.

Our organization, Atheist Freethinkers, is a participant in the Rassemblement pour la laïcité (RPL) or Alliance for Secularism, a coalition formed in 2013 to support adoption of the Charter of Secularism. Currently the RPL is preparing a brief to be presented at the National Assembly in Quebec City, a brief which is severely critical of draft Bill 59.

In conclusion, the criminalization of blasphemy is a problem which cannot be solved in isolation. We must look at the bigger picture. We must recognize that anti-blasphemy laws are a manifestation of religious privilege and that we must fight against such privileges at all levels and in all contexts.

One comment on “Anti-Blasphemy Legislation: A Question of Religious Privilege”

1 Pings/Trackbacks for "Anti-Blasphemy Legislation: A Question of Religious Privilege"