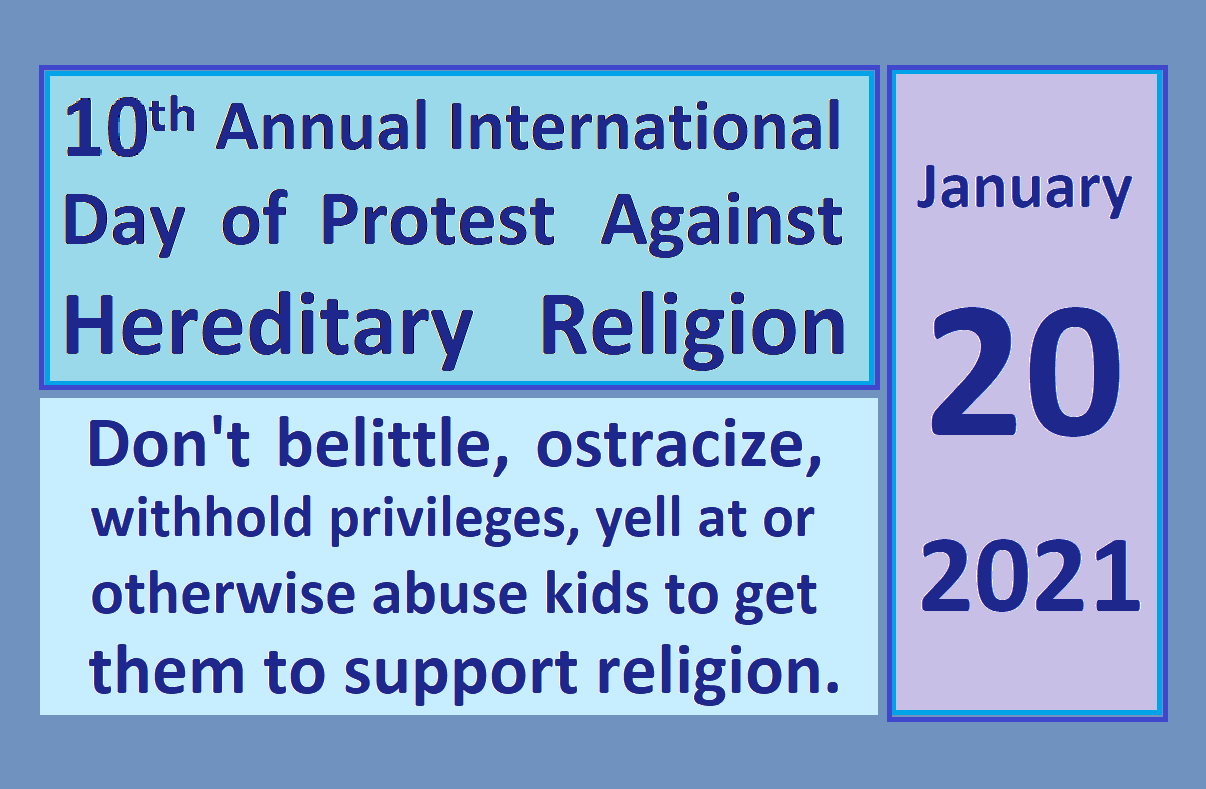 The following text is the transcript of the above video:

The Problem with Hereditary Religion

One important means of doing just that is secular schooling. All public schools should be secular so that there is no religious indoctrination in school. Thus, whatever happens in the home, at school the child is free from that environment for several hours every school day. This may not be enough to end all indoctrination—because it can still occur in the home—but it is an absolutely essential starting point.

For schools to be secular, school personnel—especially teachers—must be religiously neutral both in behaviour and in appearance. In particular, they must not wear any obvious religious symbols while on the job, especially in the classroom.

I live in Quebec which adopted a law, Bill 21, in June of 2019 which partly implements State secularism in that province. One of its provisions is to ban the wearing of religious symbols by teachers, principals and vice-principals in the public school system. This is a very good thing, although it is moderate, even timid, compared to similar legislation in several European countries. The ban in Bill 21 does not apply to non-teaching personnel in public schools, it does not apply to private schools (which in Quebec receive partial public funding) and it does not apply to child-care centres (which is a serious loophole for the obvious reason that very young children—the most vulnerable—are involved).

Nevertheless, this modest measure has attracted the ire of the adversaries of secularism who have attacked the law in egregious, fanatical and sometime dishonest terms. They have even begun a court challenge in an attempt to have this progressive legislation repealed.

Bill 21 also bans the wearing of religious symbols by civil servants in positions of coercive authority—police, judges, prosecutors and prison guards. However it is the ban involving teachers which is particularly important. Children are a captive audience for hours every school day. They look to their teachers as role models. A teacher who wears a religious symbol on the job is engaging in a form of passive proselytism which is unacceptable in that context. If teachers were to wear ads for commercial products or political parties on their bodies while teaching, that would be similarly unacceptable. Furthermore, proselytism does not mean just attempts to convert people; it also includes far more subtle and insidious goals such as normalizing and trivializing religious advertising—which I would also call religious narcissism and even religious fanaticism—so that the public will accept it without question.

Particularly disturbing is internal proselytism, when the children exposed to the symbol are from families of the same religion as the symbol. For example, the Islamic hijab is a purity symbol which implies that women who do not wear it—especially Muslim women—are impure.. If a teacher wears a hijab while the child’s mother is a Muslim who does not, that implies that that mother is a bad Muslim and an impure woman. This is a very negative message to impose on that child, and it is a message which is conveyed regardless of the intentions or the mentality of the teacher—because that message is conveyed by what she is wearing.

In addition to providing secular schools, how can we help to minimize the religious indoctrination of children? The most important thing is to respect children’s freedom of conscience by not labelling them with the religion of their parents. Any religious identification of children must be avoided because religion should be a matter for adults only. There is no such thing as a Christian child, or a Muslim child, or a Hindu child, etc.; there are only children whose parents are Christians, Muslims, Hindus, etc. To label a child with the religion of his or her parents amounts to denying the freedom of conscience of that child. We must allow the child to reach maturity before even considering such labels.

In other words, we must stop essentializing religious affiliation, as if it were some immutable and unchangeable thing like a physical attribute. Furthermore, there is no such thing as a religious obligation: a religious practice is either adopted freely, in which case it is a choice and not an obligation, or it imposed by some other person or persons, in which case we are dealing with unacceptable coercion which must not be tolerated. This is true for everyone, including adults, but it is especially true for children.

Finally, we must state clearly that some religious practices, when imposed on children, are quite simply child abuse. Of course denying children necessary medical attention for religious reasons is an obvious example. Here are two others: