↓ Skip to Main Content
Home › Ramadan is Brutal and Unworthy of Respect!

Ramadan is Brutal and Unworthy of Respect!

When I wrote a post on the nature of Ramadan and fasting on Facebook a couple of weeks ago, I had a young Muslim from Texas saying that she disagreed with compulsory fasting, but that we needed to respect the voluntary act of worship and if we didn’t, then we are intolerant. I believe that this line of argument, the culture of respect is the problem and in effect is Islamism’s shield where they do not have political power. It must be challenged head on.

Let me be very frank with you, I have no respect for and actually hate Ramadan. My reasons are as follows:

It is that time of year when the Islamists – where they have power – will hunt down anyone who transgresses religious rules and will severely punish them. This compulsory Islamic rule is enforced, including lands under the control of ISIS to the Islamic Republic of Iran, Saudi Arabia and in many other Islamic-ridden societies and communities. The fact is that Ramadan and fasting is one of the 5 pillars of Islam and it is compulsory. Anyone who talks about a voluntary act of worship is a hypocrite and being deceptive. Ramadan and fasting is one of the methods of social control and opposing it by not fasting openly has always been an act of rebellion and dissent in many countries. Prior to the rise of Islamism, those who fast were seen as belong to the dark ages; the young generation in particular has detested religion’s dogmatic hypocrisy. Sadegh Hedayat (1903-1959) for example, like many intellectuals of the Middle East in the first half of the 20th century, ridiculed the hypocrisy of fasting in Islam when he wrote: “There is no problem if you eat as much as you want in front of hungry people all year long, but you are not allowed to eat in front of those who have decided to fast.” 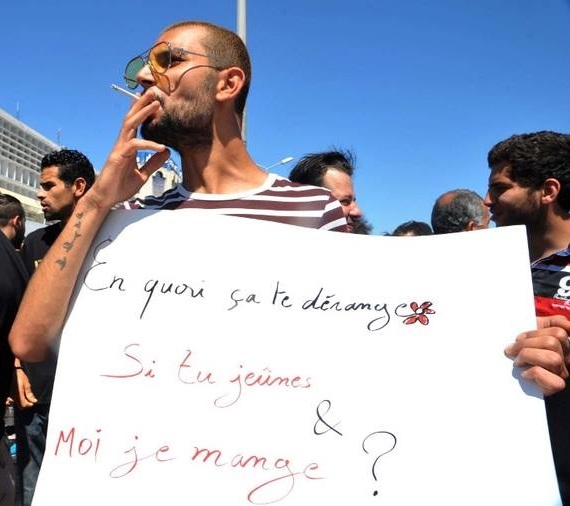 Tunisian protester smokes and holds placard: « En quoi ça te dérange si tu jeûnes et moi je mange ? »
(“Why should it bother you if you fast and I eat?”) during demonstration for right to eat and smoke in public
during Muslim dawn-to-dusk fasting month of Ramadan, recently in Tunis (AFP).

In reality, Ramadan is a dark month in many Islamic-ridden societies and communities and is enforced via special “Ramadan police.” Many businesses are forced to shut down and not serve their customers. The daily struggle and fight against this special Ramadan police is a new feature of the societies which now suffer under Islamism.

Where the Islamists have less power, in particular in western societies, they will dupe you and disguise its compulsory nature with a deceptive charitable message and you are “encouraged” to respect it and avoid eating in front of the person who is fasting. They wrap up their compulsory fasting in the guise of “respect for voluntary act of worship.” This message is aggressively promoted and any objection is labelled as intolerance. I believe that to resist and expose the horrible nature of the Islamic compulsory rule of fasting is a must for any progressive person or organisation.

I also have no respect for shameless politicians – from conservative Theresa May to socialist Jeremy Corbyn and liberal Tim Farron and all other public officials in North America and Europe – who are stepping over each other to tell lies about the peace and love of Ramadan. The very fact of a public hullaballoo shows that it is not a private matter but a public display of an aggressive policing of thought that only strengthens the hands of the Islamists. Ramadan is the month that Islamists have a free ticket to promote themselves and their agenda.

The right to fast or not to fast is a human right. However, while all over the world, in Islamic ridden societies and communities, people are forced to stop eating and punished for eating food, anyone who colludes with and encourages the Ramadan culture, is a charlatan who should not be trusted!

I will not dwell on the unhealthy over-consumption of food before dawn and after sunset which incidentally skyrockets in the month of Ramadan; and leave that for another time.

Ramadan is brutal and not worthy of anyone’s respect!

Fariborz Pooya was born in Iran. He took part in 1978-79 revolution, but moved to UK in 1979. He studied economics and politics at Oxford Brookes and Birkbeck College, University of London. He founded the Iranian Secular Society, was one of the founding members of the Council of Ex-Muslims of Britain and writes and comments on politics and secularism. He also co-hosts and produces political-social TV magazine, Bread and Roses TV. Fariborz Pooya will appear this year at the International Conference on Free Expression and Conscience in London UK, 22-24 July 2017.

One comment on “Ramadan is Brutal and Unworthy of Respect!”