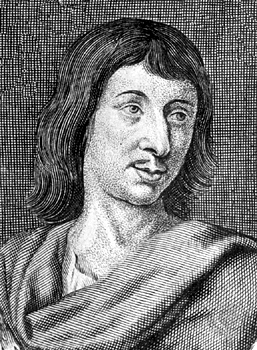 For most of us he is a lover travestied by Rostand, and losing every race to Venus by a nose. The real Cyrano [1619-1655] was not quite frustrated; he played vivaciously with life and love, and fritted away his time to the top of his bent. To the usual education of a wellborn lad he added (with Molière) eager attendance on the lectures of Pierre Gassendi*, the amiable priest who liked Epicurus the materialist and Lucretius the atheist. Cyrano became an esprit especially fort, a libertin in both senses, a freethinker and loose liver. He joined in Paris a company of sacrilegious roisterers, earned repute as a duelist, served in the army, was for a while incapacitated by his wounds, and retired from active venery to philosophy. He wrote the first French philosophical play, and opened the read to Swift by making fun of mankind via travels to unfrequented parts of the cosmos. He laughed at the venerable St. Augustine, ‘that grand personage who assures us, though his mind was illuminated by the Holy Ghost, that in his time the earth was as flat as an oven, and that it floated on the water like half an orange’.

Cyrano tried his pen in almost every literary form, seldom seriously, but usually finding the nerve. His comedy, Le Pédantjoué, seemed to Molière good enough for poaching a scene or two. His tragedy, La Mort d’Agrippine, was acted once in 1640, was immediately proscribed by the authorities in 1654, and soon the wild young men of Paris were shouting the atheistic lines of its Séjan:

“What, then, are these gods? The offspring of our fears; pretty nothings that we adore without knowing why… Gods whom man has made, and who never made man.” And on immortality:

“One hour after death our vanished soul will be that which it was an hour before life.”

Soon after this play was printed, Cyrano was struck on the head by a falling beam, and died on the blow, aged thirty-six**.

* Canon of the Catholic Church who attempted to reconcile Epicurean atomism with Christianity. Cyrano was his disciple.

** It is not known whether this was murder or an accident.

It is true that Cyrano had a large nose and was proud of it. He was also a popular poet and a skilled swordsman.

On his death, this freethinker, a contemporary of Boileau and Molière, left behind a comic work of science fiction in which declares that the god-hypothesis is superfluous, as the world is a self-propelled and self-perpetuating machine. In this tale of fantasy , celibacy and chastity are condemned, whereas suicide, cremation and large noses are praised.

« Cyrano, described by many authors as homosexual, is said to have become, around 1640, the lover of the writer and musician D’Assoucy, but they had a bitter falling-out in 1650. » (http://fr.wikipedia.org)

According to the death certificate delivered by the parish priest, Cyrano died a Christian. He was buried in the church of Sannois the next day. A remarkable destiny for a freethinker…