The Lunacy of Creationism

In the early 20th century, there were still a few people who believed that the earth was flat. In 1952, my topography professor at the University of Liège considered it worthwhile to devote an hour of course time to proofs of the rotundity of our blue planet.

Similarly, in the early 21st century, there is a current of thought which holds that everything involving life must conform to the message of the bible, in particular “creationist” sects which have the wind in their sails in the USA!

They abound in some regions of North America, to the point that, in some states, it was forbidden until recently to teach Darwin’s theories. For them, the “creator god” set everything up completely at the beginning of time. This current of thought is gaining ground in the countries of old Europe. And the religious communitarianism which is on the rise supports and reinforces this tendency.

Fundamentalists do nothing more than make assertions. Why bother with proof, they say. At most they might go so far as to criticize the errors of those who tend towards an imprudent scientism!

At Collonges, near the Swiss border, there exists a French seminary of Seventh Day Adventists. A minister who teaches geology there once exclaimed, “After all, evolution is only a theory, presented as if it were a scientific truth. We simply wish to re-establish the truth and to say that it is possible to envisage the formation of the earth and of species differently, in a way which is more consistent with biblical theses.” More consistent with Old Testament scriptures, but without diverging one iota from a literal interpretation! For, as he added, “the Bible cannot be adapted in order to reconcile evolution with the idea of God, because the Bible’s purpose is to reveal to us a vision of the world.”

Whosoever wishes to fight against creationist ideas, in whatever form they might be expressed, in order to defend evolutionary science and science in general, must first of all take a position on the concept of randomness, i.e. true randomness and not merely phenomena which may appear random because of our ignorance of underlying mechanisms or because of hidden causes. In other words, one must take a clear position by adopting either outright determinism, or a mitigated determinism which allows for a share of indeterminism, i.e. randomness, in the world.

In general, we tend to think that a cause or a set of causes always produces the same effect. We need to ask ourselves: is this a universal law? Or are there phenomena which contradict it?

I admit that I am unable to reply objectively to this question. Experimentation can only teach us about phenomena which obey laws. If a phenomenon is effected by even a small amount of randomness, how can we detect the presence of this randomness if it does not obey any law? Chance is not repeatable. It is thus undetectable. True randomness therefore can never be either proven or disproven. It can only be unseen, neglected.

But, as I did not wish to remain in an uncomfortable position of perpetual doubt, I was forced to choose. So I opted for the existence of randomness, with the concomitant risk of being mistaken. Chance, “true” chance, is now part of my paradigm. This was the necessary cost of moving forward intellectually.

If one does not accept randomness, then it is impossible to explain the occurrence of mutations, especially mega-mutations which, as they modify genetic codes, lead to the appearance of new species. It would be unthinkable for me to adopt the teleology of Theillard de Chardin.

Chardin of course accepted the evolution of species, indeed he promoted it, but he was a partisan of the idea the evolution must be guided towards a final purpose. He considered that evolution was too complex to be the result of chance. For him, the touch of god must be present in order to direct evolution from within, towards increasingly conscious beings, ultimately producing man.

But this is a compromise which contributes nothing to our knowledge. Furthermore, it involves the intervention of a frivolous divinity who, in spite of having absolute power, arrives at its ingenious ends only after multiple attempts, attempts which are abandoned one after the other because leading to dead ends. Unless the divinity took this circuitous route just for fun?

If the god of the Book had intended that man be his final creation, with the most highly developed consciousness, why not go there directly? Was it really necessary to create so many sort-of intermediate links such as Australopithecus, Homo habilis, Homo erectus, Archaic homo sapiens, Neanderthal man, etc.? Why bother? The question is unanswerable, unless we take refuge in mystery beyond all human understanding.

Anyone who adopts the teleology of Chardin must also be fully aware of its consequences and accept them – in particular as regards the concept of human freedom.

For a teleologist, i.e. one who sees design and purpose in the universe, a world governed by divine will cannot be anything other then fully determined. And as part of that world, we and all our behaviours and actions are so determined. We thus have a sort of predestination. Every action taken must be predictable, even if the thread of causality is not obvious. Each word spoken would be inevitable as it must be the result of a multitude of real causes, even if their complexity means that we are not conscious of them.

If the log book of world history existed, there would not, in my opinion, be a page about me, where it would be inscribed that a child of male gender, son of Georges and Jeanne, must be born on the 1st of January 1932.

Similarly, I do not accept the idea that 100 years or 100,000 years ago, there was a deterministic certainty that some seven billion human beings would today populate our planet and that they would be precisely the seven billion individuals who do live today, and not anyone else. That would imply that none of the wars, massacres, genocides, tortures, famines, epidemics, etc. which have marked the 50 or 100 thousand years of the existence of Homo sapiens sapiens could have been avoided.

Furthermore, we must have the courage to reject creationist mythologies inherited from religions of neolithic cultures. We must dare to say that the accounts of the creation of the world and of living beings included in Genesis in the Christian bible, and in the quran, are infantile.

To do this, we must present the entire evolution of human knowledge since the 16th century – in all domains, not just biology, and not limiting our efforts to the defense of Darwinism. I will consider only two examples: the origin of animals on earth, and the origin of the material world including earth, sun and stars. There are others!

Currently, the scientific consensus is that the earth was formed 4.5 billion (4,500,000,000) years ago. Paleontology has shown that, throughout the earliest eras following the solidification of the earth, the only organisms were unicellular, called protozoans. Multicellular organisms, the metazoans, came later in time because they are found only in younger strata, about 3 billion years old. In more recent strata, new forms of cellular colonies appear. The study of these, and of the various types of currently existing cellular colonies, allows researcher to determine the stages which led to the appearance of complex federations of trillions of cells such as higher mammals.

There are many living progeny of this process, but there are hundreds of thousands of types which have disappeared forever; traces of these extinct species found in the fossil record confirm that they once existed.

So will someone please explain to me the following little sentence taken from the Yahwist version of Genesis in the Old Testament:

“From the soil Yahweh God formed every wild animal and every bird in the sky, and he brought them to man so that he could name them. Whatever the man called each living thing, that became its name.”

I have always wondered how a Christian paleontologist could be satisfied with such a statement. The first man apparently knew the large reptiles which became extinct 65 million years ago: brontosauri, tyrannosauri and iguanodons for example. Not to mention the prehominids such as Proconsul, Paranthropus and Oreophithecus, or hominids such as Tournai man, Ororin, Australopithecus, Homo habilis, Homo erectus, Archaic homo sapiens and Neanderthal homo sapiens, all now disappeared from our planet.

For the authors of the Old Testament, whom I have been assured were inspired by the divinity, the earth was flat and the sun moved around it. The experience of Galileo is the best illustration of this mentality. But today, no one can possibly doubt that the earth is spherical and revolves around the sun.

However, we have progressed much farther than that.

The development of instruments of observation and exploration has made major technological leaps, allowing us to draw conclusions much more precise than what was known in the 17th century. If the theologians of 1633 who opposed heliocentrism had been told not only that the Earth is not the centre of the world, but that the sun is just an ordinary star among a hundred billion stars in our galaxy, the Milky Way, and that the sun is not even at the centre of the galaxy but at 30,000 light-years from it, and that our galaxy is merely one among a huge number of others, what attitude would they have taken?

I could continue by examining other statements from scripture and show that they too are similarly infantile.

We must have the courage and the determination to denounce all that. 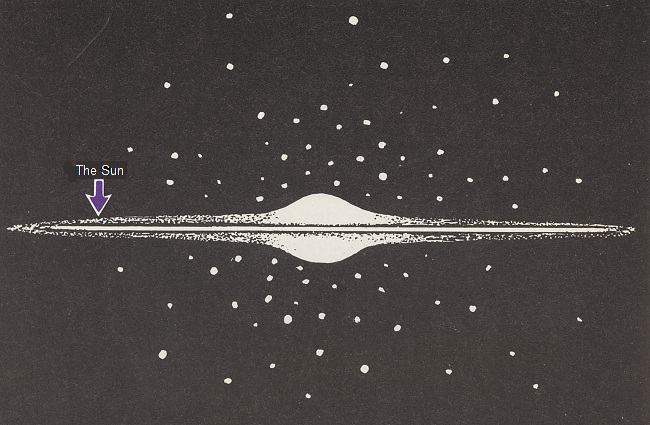 View of the Milky Way, a galaxy about 100,000 light-years in diameter and 1000 light-years maximum thickness, in which the Sun is a small ordinary star situated at the extremity of one spiral arm. Not even at the centre…!