↓ Skip to Main Content
Home › Books › Stillbirth, The Failure of Secularism in the English-Speaking World

Stillbirth, The Failure of Secularism in the English-Speaking World

I recommend David Rand’s book Stillbirth to anyone interested in secular issues. It clearly exposes the differences between Anglo-Saxon secularism of the Lockean variety and republican secularism à la française. The main point which I retain is that it is freedom of conscience that must be protected and not just freedom of religion. Freedom of conscience includes, in addition to freedom of religion, the freedom not to have a religion and to change one’s religion. To guarantee this freedom, the religious neutrality of the State is not enough. Only a separation of the State from all religions as in republican secularism can guarantee this freedom. The author demonstrates that true secularism is incompatible with multiculturalism, which considers religion to be an essential attribute of the individual. This is why, in Quebec, Bill 21 is met with so much opposition from English Canada.

The book traces the history of secularism in France, the United States, England and Canada. It exposes the excesses resulting from a weak separation between State and religions, as is currently the case in Canada and the United States.

The book proposes a universalist model including the equality of all humans, regardless of gender, sexual orientation, religion or ethnicity, freedom of conscience and separation between the State and all religions.

Finally, the author takes issue with the ideas of the post-left which rejects the ideals of the Enlightenment. It is indeed these ideals which constitute the very definition of the true universalist left. The post-leftist ideology considers all action in terms of race and ends up conflating race and religion.

The book ends with a lexicon which rigorously defines the terms used in it.

Stillbirth is a book not to be missed, offered at a bargain price on Amazon, even if you are not Anglophone. 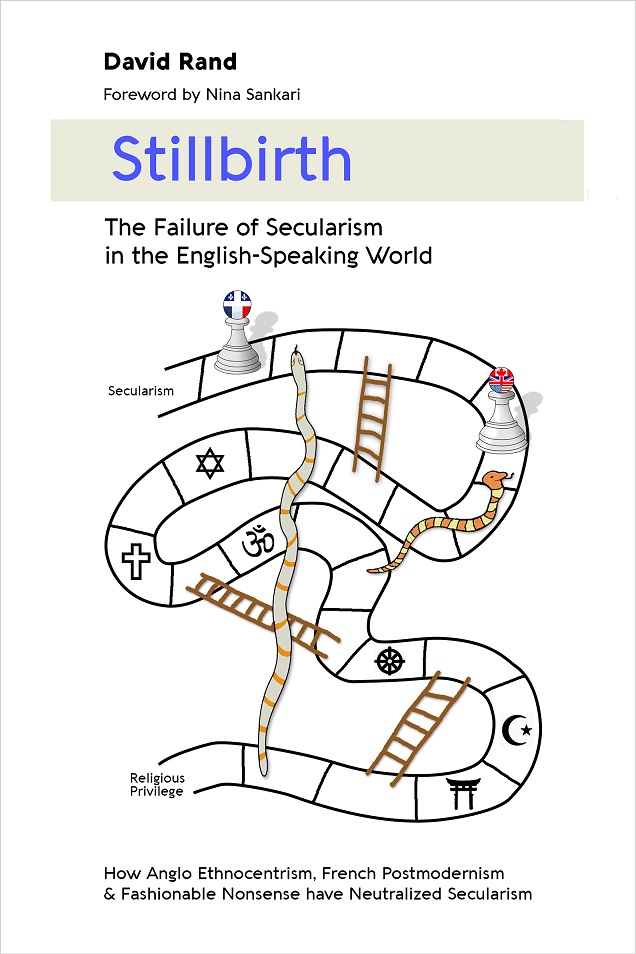 We are all familiar with Thomas Jefferson’s famous metaphor of a “wall of separation” which he used in an 1802 letter to describe his view of religion-State relations in the USA. And yet, the US Constitution, including its First Amendment, adopted in 1791 and forbidding the establishment of a State religion, never mentions the concept of “separation.” Over two centuries later, secularism in that country is in shambles, […]

The Canadian constitution is worse, declaring “the supremacy of God” in its very preamble. Meanwhile, the Criminal Code of Canada includes hate propaganda legislation which grants impunity to religions—arguably the greatest source of hatred—by allowing believers to make hateful declarations based on religious texts, declarations which would be prosecutable if made by non-believers. As for Great Britain, it is even further from secularism, having a State church, the Anglican, […]

Before the French Revolution, France was in an even worse situation than Great Britain, having an absolute monarchy, far more autocratic than the British and very tightly allied with the Roman Catholic Church—a near-theocracy. However, the revolution effected an abrupt break with that rigid tradition.

The 1789 Declaration of the Rights of Man and Citizen, like the US First Amendment, guarantees freedom of religion, but unlike the latter it allows that freedom to be limited by law. A little more than a century later, the 1905 Law of Separation between Churches and State explicitly declares, in its very title, that crucial word “separation” missing from all legislation in the US, Canada and Great Britain. […]

In June 2019, Quebec adopted legislation, Bill 21, which partially implements State secularism in that French-speaking Canadian province. Although weaker than similar legislation in several European countries, that law was met with overwhelming and fanatical opposition from mainstream media and politicians elsewhere in Canada. […]

As bad as the situation was previously, in the 21st century it has become much worse with the advent of various anti-Enlightenment ideologies, […]

2 comments on “Stillbirth, The Failure of Secularism in the English-Speaking World”